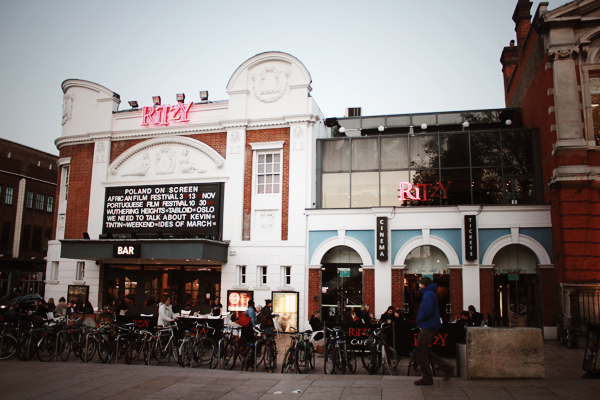 Its been a long while since I’ve done a post in the Cinema Experiences feature! I have actually seen a few classic films on the big screen since my last post about Gone with the Wind at the Prince Charles in Soho, but just didn’t have time to write about them. Fast forward to yesterday evening. The Ritzy cinema in Brixton is currently doing a series called the “A to Z of Cinema.” Today happened to be “O for Olivier” so my friend Chris and I went down to watch the Oscar-winning Hamlet (1948). And it was a celluloid print that made for some scratchy old-school viewing. I loved it.

Hamlet has long been my favorite of Laurence Olivier’s Shakespeare trilogy, and one of my favorite from his filmography as a whole. And I’m not just saying that because it condenses a 4 hour play into little more than 2.5 hours (although I have to admit that does help). No. I’m saying it because it feels more cinematic than Henry V or Richard III. There’s an artistry that is not present in the other two films, and indeed, this is what Olivier was striving for when he chose to collaborate with Alan Dent to adapt Shakespeare’s greatest tragedy for the screen.

With Henry V, Olivier wanted to bring theatre and cinema close together. He did so obviously by bookending the live-action with scenes set on the Elizabethan stage. In contrast, Hamlet is purely cinematic. Soliloquies are done by a mixture of speaking out loud and voice over, the later of which wouldn’t work in the live theatre. Although most of the story takes place inside a Elsinor Castle, the use of deep focus photography lets us know that what we are watching is “real”. However, what seems to really interest Olivier, and the theme around which all aspects of the film revolve, is Hamlet’s psychology. This is evidenced by the  bare sets, moody black and white photography, and the loud, throbbing heart beat noises whenever Hamlet starts to go a bit off the rails.

Chris knows of my fondness for Larry and asked what it was about him as an actor that I liked best. I thought for a split second before answering. The thing I like most about Laurence Olivier as an actor is his voice. I love listening to him recite Shakespeare (okay, I’d listen to him recite the phone book but that’s beside the point) because he speaks the lines so naturally and you can just tell he actually understands the nuances and phraseology. It’s rather poetic and beautiful.

But back to the actual cinema experience. Sitting in possibly the most comfortable seats ever in one of the oldest picturehouses in London with a box of salty and sweet popcorn whilst a very handsome, blonde-haired Laurence Olivier rattles off Olde English as if it’s modern language? Priceless.