Hi, everyone! The UK publicist for Vivien Leigh: An Intimate Portrait sent me an advance copy in the post and I’m so excited to finally be holding it in my hands! Five years from idea stage to finished book – it feels surreal! I couldn’t have done this without the support of Vivien’s fans here and elsewhere on the web. To say thanks for helping to build and sustain this great community, I’m teaming with Running Press and Perseus to give away three FREE signed copies! There are several ways to enter, as listed above. The contest is open to entrants worldwide and will end at midnight on October 10, the date of publication in the UK.

So far, advance reception of the book has been really positive. Kirkus Reviews called it “a worthy tribute to this eternally fascinating star.” That’s encouraging! Not long now until it’s in bookstores!

This contest has now ended and the winner has been notified. 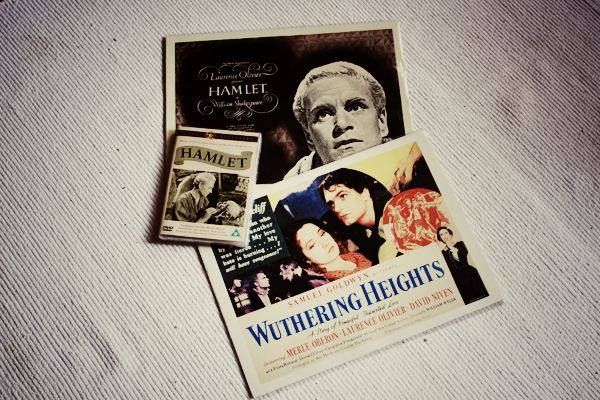 We’ll be ringing in Sir Laurence Olivier’s 105th birthday on May 22nd, and what better way to celebrate than by giving away a special present representing his finest work? One lucky winner will receive the fabulous goodies pictured above!

*This DVD is region 2, which means it will only play in a European or region-free DVD player.

This contest is open to participants world-wide. To enter, leave a comment below saying what your favorite Laurence Olivier film is and why. Comments without the why bit or a valid email address will be ineligible. As usual, participants can earn an extra entry for promoting vivandlarry.com on Facebook, Twitter, or your blog. Don’t forget to post a link to where you’ve promoted!

Contest ends May 31, 2012 and the winner will be chosen via the random number generator and notified by email. 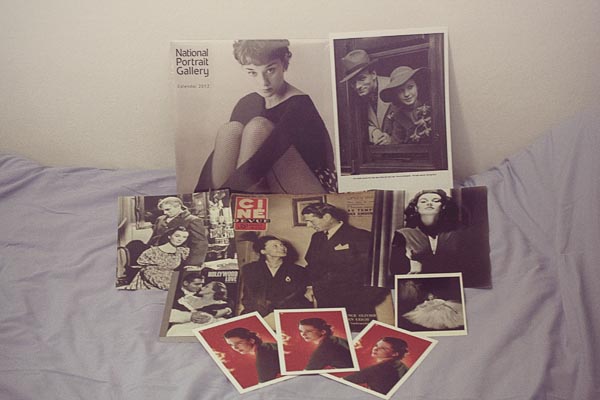 It’s the most wonderful time of the year!

In honor of the holiday season, I’ve decided to host a new contest here at vivandlarry.com, and I’m really excited because the prize is definitely the best yet! One lucky fan can win the entire gift package pictured above!

The contest ends on January 21, 2012 and is open to fans worldwide. The winner will be picked at random using the Random Number generator and contacted by e-mail.
Good luck and Happy Holidays!

Can you believe it’s already May? Me neither, but let’s ring in a new month with a new contest!  One lucky winner will receive a copy of the July 29, 1946 issue of LIFE magazine featuring the lovely Vivien Leigh. The cover photo was taken by famous LIFE photographer Philippe Halsman, who had a very interesting story to tell about his encounter with Vivien during this particular photo call:

“No one who has seen her in Gone with the Wind will be surprised that Vivien Leigh became in my eyes one of the most beautiful women in the world. I was delighted when Life asked me to photograph her for a cover.

I knew that she suffered from t.b., but I was shocked by her pale and fragile appearance when she entered my studio. Vivien asked me whether she should put on some rouge, but I saw a strange attractiveness in her transparent paleness and photographed her as she was.. Her features were exquisite, she was full of gentile charm and friendliness and at the end of the sitting I had the feeling that I was photographing something very unusual: an angel-like star.

The shock came when I developed my photographs. What I saw was not the image of a fragile, delicate angel but that of a tired and sick young woman. I phoned Vivien and told her it had been a terrible mistake on my part to photograph her without makeup and I hoped she would pose for me again. The angel-like voice answered that she understood and that she would come to pose tomorrow.

We used make-up in the second sitting. Vivien posed with more spirit than in the first sitting, and when her pictures were developed and printed I was delighted with the result.

The telephone rang. It was Vivien, who was worried about her pictures and wanted to see them. Whenever I photograph for a magazine my rule is never to show a picture to the sitter before publication. But how could I say no to an angel, who without complaining left her sick bed to pose for me a second time?

I finished my work and took the best prints to the Waldorf Astoria where she and her husband, Laurence Olivier, were staying. Although I knew that on doctors’ orders Vivien spent most of the day in bed, I felt a pang of sadness seeing her pale and emaciated in the huge hotel bed. Fortunately, my pictures showed none of her illness, only her beauty and charm. With a touch of pride I was showing her my prints when I was struck by the change in her expression. Instead of and angel I saw a wounded tigress. “These pictures are terrible,” she said, ‘and I forbid you to show them to the magazine. I know your boss, Mr. Luce, personally; if you disobey me, I will destroy you.”

A knock at the door interrupted her. The hotel waiter appeared with Miss Leigh’s tea and cookies. Where should I put the tray, Miss Leigh?” he asked. With a sweet and melodious voice, Vivien answered, “could you, please, put it on the night table.” The waiter obeyed, looked admiringly at the prostrate angel, deposited the tray and left. When the door closed, Vivien took my beautiful prints and tore them into little pieces. I thought of the hours I had spent in the dark room, mumbled a good-bye and left, feeling completely crushed.

On that same evening, Vivien Leigh’s public relations man called me up. ‘I know that Vivien has torn up your pictures, but she did not tear up the contacts which you left in the envelope. Olivier has seen them and he is crazy about them. By all means, make new prints and submit them to Life.” I followed his advice, and one photograph, showing Vivien with an alluring Mona Lisa-like smile, became a very successful cover.

The winner will be chosen at random using the random number generator and notified by email. The contest ends May 31, 2011. Good luck!