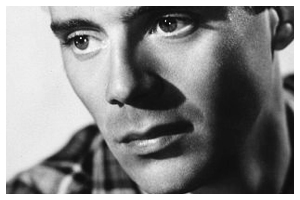 When Vivien had left Notley she once came down to my house, and felt utterly sad because she no longer had a garden…she adored mine, which was rather marvelous. Suddenly she said: “I want a little house…with a view like this, but by water…on a lake or a stream…and with trees…” and I had seen the exact house three days before. I told her, and she was off in a flash and found it to be the very place of her idea…that’s how she got Tickerage Mill. I had wanted it very much for myself, but it was a bit too far from town, I thought, and too small for me. Viv was instantly at home there. Shortly afterwards I left Hascombe and moved down into Sussex where we were virtually neighbors. She was always taking cuttings and bits and pieces, and on one occasion brought me a couple rose bushes…it was a cold day in early March: She said, “If you put them in now you’ll just make it; this one is called after me…rather pretty…and very sweet of them…and this one,” indicating a little bunch of thorns in a plastic bag, “this one is new…I ordered it specially for you, it’s called “Super Star”. And I said, rather lightly, “Then they are both called after you…how lovely.” Viv was quite still for a moment, and then her eyes rimmed with tears and she hugged me like a little bear. And we just stood there in the cold garden amongst the silent roses until she had composed herself. We didn’t say anything more. A little later she said the plants all needed a good mulching…and we went into tea.

When she was ill, this last time, I wrote and said that I’d come to see her when she was a bit stronger and that I would not bring her flowers because everyone said that her room was rather like a Chelsea Show…and she sent me card with a lady wearing a huge cartwheel hat covered in cherries and lace, an old Theatrical Post Card, I think it was of Lily Elsie…and she wrote “This is what I wear in bed to receive my visitors…don’t wait until I am stronger…I’m simply splendid…do, do come in sometime next week.” But there wasn’t a next week.

I suddenly remember another time at Notley when my beloved chum Kay Kendall was staying there, and was one evening behaving rather tiresomely, picking and niggling and being naughty in general. And Viv suddenly said, with the sweetest, blinding smile, and that soft pussy-cat voice: “Katie darling, if you are trying to pick a quarrel with me, don’t. I shall win.” And that was that! Later they both went out in a punt on the lake and fell in, or something, I don’t remember in detail, but there was laughter flooding through the garden, and they were having a hell of a time pulling the punt back to the bank.

Below is part of a letter that Dirk Bogarde wrote to one of his good friends the day after Vivien’s funeral.
* Thanks to Tanguy for sharing

‘Yes. Years ago. At Adrian’s in Highgate. She thought that I should break into Society.’

The cat’s smile grew whiter. ‘And did you ?’ she asked with sweet, cutting, innocence.

But later, as time went on, she used to come to tea, and I was invited to Notley, the ravishing house they had near Thame… tremendously formal and one was forced to dress for dinner, even on Sunday… which I always refused to do, I look like a Maltese waiter in a dinner jacket alas, and wore a dark suit instead. It was a sign of her acceptance, finally, of one that this was permitted. After the divorce she was desperately sad and lost… and one grew closer to her in her sudden isolation. I found her a very pretty little mill house called Tickeridge Mill into which she moved and decorated with her usual perfect taste… it was as pretty as a Doll’s House and she really did seem to love it. She was a very enthusiastic gardener… we exchanged roses… the old musk ones like Rose de Meux, Belle de Crécy and so on… and she gave me two one day with justifiable pride… one called after herself and the other, of a rather violent scarlet, called Super Star. We both agreed, with due modesty, that it also was named after her. A pleasant conceit which she accepted with delight. The last time we met was in April, she was planning an extension to the water garden at the Mill…. John Gielgud was staying, and her pretty mother… she was happy but restless… not quite finding it possible, however hard she tried, to accept the loss of her old world and adjust to the new world about her which she increasingly found vulgar, shrill and ugly. And with reasons. We discussed, over Lemon tea, the idea that perhaps she and I might do a revival of A month in the Country with John directing… for Television ! I was immensely shocked.

The very thought of Vivien on Television appalled me. Joining the world of mediocrity she so detested. But she felt she’d not be able now to sustain a long run in the theatre… I felt miserable when I drove away. I couldn’t really put a finger on it, the cause of my sadness, she had looked as beautiful as ever, was funny and witty and gay… but there was a deep running stream of unhappiness hidden beneath the vivid surface.

And then when she was ill… not seriously we thought… I wrote and said I’d not come to see her until she was really stronger and “receiving” again. A postcard arrived one morning, a sepia photograph of Lily Elsie in a huge feather hat. ‘Do come and see me. Do. Do. Do. I “receive” every day in a pretty hat just like this ; it looks delicious in bed’ An hour later I was told that she had died in the night. But until yesterday I couldn’t, or I wouldn’t, take it in.

She had, as someone said yesterday, a bloody good ‘House”. Everyone was there, from the most illustrious to the humblest… and the pale, wan fans, in the public galleries. Mozart, Handel, a glorious hymn of Bunyan’s “To be a Pilgrim”, the address, of great beauty and dignity and love, by Gielgud…. Emlyn Williams read Donne’s “Of the Progresse of the Soule” and finally Lady Redgrave (Rachel Kempson) spoke some enchanting lines of Francis of Assisi… do you know them ? They were in a book found open on her bed, marked in pencil.

As I said, a sad, but somehow deeply uplifiting day, and loving. We were all there to ‘send her off’ so to speak, and we did it with love and pride, respect and gratitude… gratitude for her beauty, her grace, her wit, her courage and, ultimately, her friendship.

The Mill is empty now and already thieves have broken in and stolen idiot things… a jar of her face cream, a bowl of junk jewelery she kept on her dressing table… three bottles of beer. Odious people. Souvenirs I suppose.. Seeing the Memorial Programme one knew that inevitably she had gone. Just ‘Vivien Leigh’ in neat black letters, a fine rain falling in Trafalgar Square, pigeons wheeling above a dense, silent, crowd… the soft organ and the whispering, shuffling, feet of us, her late friends. So bloody final. Complete. Done. Wretchedly early, this harvest… there was so much time left…. what in God’s name is fifty-three ?