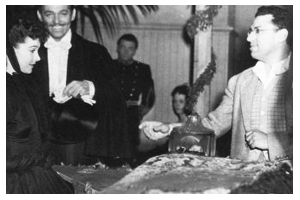 Cukor: First of all, Vivien was a wonderful screen actress. Quite apart from her looks she had something very strong and individual and interesting. I saw her act very well on stage. She was brilliant as Shaw’s Cleopatra, and she made a damn good Lady MacBeth.

Lambert: A much underrated performance.
Cukor: She was often underrated because she was so beautiful.

Lambert: And many of the London theatre critics seemed to bear a grudge against her. There was always the implication that Olivier was “carrying her.”
Cukor: Absolutely untrue. She did remarkable things on her own. In Duel of Angels, a very difficult part. And I wish I had seen her in Lady of the Camellias. She said it was the part she liked best. She was a consummate actress anyway, hampered by beauty–and as a person the complete romantic. She had this great talent for creating beauty around her, she made these exquisite gardens, dressed ravishingly, she had true breeding, and when she invited you to dinner, the food and everything was perfect.

Lambert: Sometimes she gave me the impression that this desire for beauty and order around her was to compensate for a disorder under the surface.
Cukor: Yes. there was something tragic even when she was at her happiest. Somehow, I wasn’t surprised when I heard she died. And Kate Hepburn said, “Oh, thank God!” because she’d suffered so much and was so miserable, really, from the time her marriage with Olivier broke up to the end of her life. Although most of the time you’d never suspect it. She was Rabelaisian, this exquisite creature, and told outrageous jokes in that cool voice and pretty enough to make you weep. I remember taking her to see Cole Porter not long before he died. He’d had a leg amputated and was wretched and didn’t see many people. But he wanted to see Vivien. He couldn’t move, he could only lie there, and it was painful, but Vivien was so entertaining that he obviously loved her being there. She dressed very stunningly and covered her fingers with rings, like a gypsy fortune teller. I’d never seen that before, though it’s very fashionable now. From time to time we had to leave the room when a nurse had to give Cole Porter a shot of something. Then we’d come back, and Vivien never let up, and he was entranced. When we left and got into the car, she chose to sit up front next to the driver. She was silent for a long time. Then she turned around and I saw she’d been weeping, her eyes were full with tears.

Lambert: That’s wildly romantic and so like her.
Cukor: As a friend she was always very tender and appreciative. I remember a big party I gave for her the first time she was out here after her separation from Larry. It was the full Hollywood thing with fountains and bands and a swimming pool. She came in, looking absolutely beautiful, and said at once “Ooh, darling, can you really afford this?” Then as it was Sunday Night, and she knew I was working the next day, she came over at a certain time and said, “let me tell them all to fuck off!”

Lambert: She’d told me once that you absolutely laid out for her the part of Scarlett O’Hara in the tests and the rehearsals and talks. Having seen the tests, I know exactly what she meant. It was another instantaneous meeting of the actress and the part.
Cukor: There’s a funny story that Olivia DeHavilland tells about this. After I left the picture, Olivia would come over to my house and do some moonlighting with me–I’d run the scene with her and so on. SHe felt rather guilty about going behind Vivien’s back, until she found out that Vivien was doing the exact same thing. And did you know that Vivien and Olivia, when they’d heard I’d been removed from the picture, were both dressed in their widow’s garb that day? They rushed over to David’s (O. Selznick) office, all in black, and pleaded and threatened and did everything in the world, but he remained obdurate. I was rather touched when I heard about that.

Lambert: In the tests you shot Vivien hadn’t yet mastered her Southern accent, but everything else had complete grasp and authority. And one scene, when she’s trying to get Ashley back after the war, she plays even better than in the finished film. It’s a kind of neurotic power, really desperate and frightening. Victor Fleming’s version seemed almost tame in comparison.
Cukor: Yes, that was much better in the test, and she knew it. At the time they still shot six days a week, and the picture was going on and on, and she wanted to get back to Larry who was in England. She was exhausted and impatient, and would come spend every Sunday here. One day she arrived, took a swim, lay down on a sofa and fell into a deep, absolute seep. Se was out for several hours, the she woke up, giggled and told me, “I was an absolute bitch on the set yesterday.” They’d been trying that very scene with Ashley, and she felt it wasn’t right, so she made poor Victor Fleming trot over and screen the test. That was so typically straight-shooting of her, as an actress and as a human being.