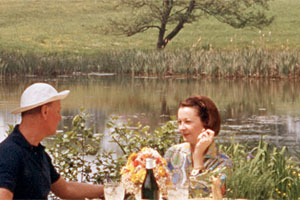 For me, the only good thing that came out of the break-up of the marriage of two people whom I jointly so much admired was that Vivien came, by chance, to be a close neighbor of mine in Sussex.  At week-ends we would lunch often in each other’s houses, and if I was giving a party for my other neighbors she still preferred to be introduced as Lady Olivier, simply because that meant, symbolically in her eyes, that the link wasn’t finally broken.

And if I introduce her to the dullest and most undistinguished guest, whispering in her ear, ‘Please be kind to him for a few minutes,’ I would find her half an hour later still talking away brightly, as though he was the one person she had hoped to meet.  She had that kind of manners.

Tickerage Mill was just as romantic a setting as Notley, if on  a smaller scale.  The lake close to the house provided for her the essential ingredient of water always present, and she assured me that she was comforted  by the knowledge that it was there, even when obscured by the mist of autumn, the winter fogs.  There was also a miniature wood filled with carpets of anemones and bluebells that she had planted, which burgeoning in the spring might have been created for Titania.  Like my mother, Vivien had green fingers, and in an enviously short time, the garden, which had been sadly neglected till the arrival of the new owner, took on a blossoming look of someone who knows that she is cherished.
One learnt to speak of the past now only in terms of present theatrical successes.  The Olivier Othello was rightly hailed as a masterpiece, the definitive interpretation.  Would this still have happened had they stayed together?  The only comment I would wish to make is that other people’s relationships are surely their own business.  I do remember Vivien one week-end speaking with overflowing admiration of a recent visit to the National Theater, and how she had visited the interpreter in his dressing-room to tell him so.

Thus it was good to be made aware that there was a bridge still between the two islands that had broken from the mainland.  In her turn, Vivien had conquered Broadway in her first musical, Tovarich, the most strenuous  acting, singing and dancing role she had ever tackled.  After a six months run to packed houses, her contract allowed her to take a holiday. But when the management were unable to find any comparable replacement to fill the gap, she agreed to forgo her break so that the theatre should not have to close and the rest of the cast forfeit their salaries.  The August heat of New York is proverbially merciless.  Not surprisingly, the star of the show collapsed, and another bout of illness followed.  It was to Tickerage she came to find sanctuary, and slowly her strength and her spirits returned.  But each attack weakened her defenses and her reserves for the final one.  She was coming to lunch with me on the Sunday when she had the first intimations that the end was near.  ‘Vivien has a slight temperature,’ a voice said on the phone.  Summer flu perhaps?  I had no premonition.  How seldom one has.  After all, I had dined in her company in a friend’s house only three nights before in London, and she had seldom looked more serenely beautiful.  That was how I saw her and will always see her, as I put down the telephone that day, or stand in front of the picture by Sickert that she left me in her will, so suitably entitled “The Belle of the Ball”, where the central figure is whirling round the room in a hooped party dress to the sound of the music  from the piano, the waltz that will never entirely be stilled.

I shall always recall, too, one early summer’s day that I spent with her at Tickerage.  No work this time for her guest, in the garden. No dead heads to be decapitated and deposited on the rubbish heap.  Instead, the slopes of the lawn on to which her bedroom looked out were carpeted with white daisies.  The white flowers of any shape and form, that she loved above all else.  I had brought George Douglas with me, one of the best of the younger school of photographers.  On our arrival, our hostess was already busy tying up a climber at the side of the porch.  She looked down from the steps, and seeming as young as Pauline, in her lime-green cotton shift, with no make-up on her face, exclaimed, ‘Oh dear, I am afraid I look awful.’  She then proceeded to be as professional as always and to put herself into the photographer’s hands.  I suggested that some of the pictures should be taken on the lake, and she at once entered into the spirit of that, fetching a large straw hat, such as Camille might have worn on her ill-fated visit to Armand in the country.  The difference being, though, that whereas Camille was simply playing at being a milkmaid and was urban to her finger tips, Vivien was at her happiest in the country, especially when she had time to work herself in the garden.  I awaited my moment, to announce, with a casual flourish of one-upmanship, that I had just heard to my delight that Harry Wheatcroft was going to name a new rose after me, to be on show next day at Chelsea.  To which Vivien rejoined, with the sweetest of smiles, ‘Oh I only hope it won’t hang its head like the one named after me. So mortifying when I gave it to my friends at Christmas’.

Still, it remains a kind of immortality, and at least, she herself never hung her head.  There was a moment, before we left after tea, when George was stacking away all his cameras and equipment in the car, and my hostess and I walked away towards the bed of bush roses, that included the scarlet and white Ragusas ordered by me as a surprise house-warming and planted during her Australian tour.  Already they had grown almost as tall as we were, and that I took-wrongly as it turned out- to be a good omen.

‘I agree with you,’ she said quietly, ‘that all life consists of a continuous compromise, for everyone.  This is a breathing space for me, while I refill the reservoir.  I shall never marry again.  I am certain of that.  Larry still possesses too much of me.  But as long as I am well enough to go on working, I shall be all right.

‘You remember the first day we met at Jeanne’s for the air rally, and the wonderful party Noel gave that evening, and Ruth Chatterton was there?   I was making “Fire Over England” then, and Larry was in it too. Flora Robson was playing Queen Elizabeth.  It was in that film that Larry and I met, too.  I wonder whether-if the film was shown again-you would see it in our faces, the confrontation with our destiny.  I don’t think I have ever lived quite as intensely ever since. I don’t remember sleeping, ever; only every precious moment that we spent together.

‘But now I know differently, of course.  I know everyone has to face periods of despondency and that one must not always trust everyone, or else one can be very hurt.  At the same time, I have learnt who really are my friends, and that can be very comforting, and gives one confidence for whatever lies ahead.

‘ Nevertheless, immutably, it is always easier for a man to grow old than for a woman.’

I put my arms round her, not speaking any more, and then I drove home through the quiet Sussex lanes, wondering what sort of impression the day had made upon my companion, so much younger than myself, who was meeting Vivien Leigh for the first time. George Douglas had captured on his lens most of the leading characters on the contemporary scene, and was inclined to be pessimistic and apprehensive. Therefore I awaited his verdict with some trepidation.

‘It is refreshing,’ he said, ‘to meet a star who is exactly what I hoped she would be.’

That was praise,indeed.  For a photographer, operating at his level, has an acutely critical eye, in the same way as an architect, entering a house for the first time, instinctively visualizes the alterations and improvements he would make if he could get his hands on the property.  Or again, a celebrated plastic surgeon, such as Sir Archibald McIndoe, automatically, even as he is introduced socially to a fellow guest at a party, is taking in a tuck here, and eliminating a sag there.  All the inexorable, unwanted signs of the outward decay that often does not match the inner fire.  On one occasion, I asked Archie McIndoe if he considered that the faces of all women would be improved, at a certain stage of the journey, by surgery; it is not surprising that I have not forgotten his reply.

‘There is one face that I would not want to touch.  It needs no help from me. It is the face of Vivien Leigh’.