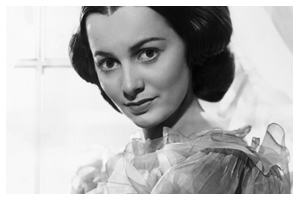 I first met Vivien in David Selznick’s office, on the eve of David’s announcement to the world that he had at last found Scarlett (Vivien) and Melanie (myself). The purpose of the meeting was not only to introduce his two leading ladies to each other, but to photograph them together as well, so that the picture could go out with the news story.

I remember her coming forward to greet me and to shake hands with me, with her special air of cool, contained, and delicately assured good manners. In thinking now of that moment, the recollection of her evokes all sorts of images; quicksilver; elegance and composure, like a small Siamese cat; and the tinkling charm of a Chinese wind lantern.

In her work on Gone with the Wind she was perfectly prepared, precise, adept; she never lost her poise, despite the immense strain that she was under. She had a self-discipline which was not harsh, but of an exquisite order. Indeed, I think ‘exquisite’ is the word for her, in every sense and in every way. She had humour, and wit also, in all their different shades: satirical, ironic, at times sibtle, at times ribald.

“We got into a conversation about childbirth. I was fascinated because Melanie had to give birth in the film and I’d done quite a lot of serious research about that. I found that talking to a doctor and talking to a woman who’d had children conveyed absolutely nothing at all. Doctors simply don’t remember the type of sound that a woman makes, or what she does with her hands. They can’t remember anything, isn’t that odd? So George Cukor said, ‘I think you’ve really got to go to a hospital and see some births…’ So I did, and I was deeply impressed. I found it so moving, beyond my wildest imagination. I spoke to Vivien about this, and she said, ‘Oh, I didn’t care for it at all. I found it humiliating.’ ‘Humiliating’ was the word she used for having a child. I have never heard another woman say that – ever. It fascinated me. I found it absolutely incomprehensible, an attitude of superiority to this basic and fulfilling experience, for no matter how much trouble it causes a woman, most hardly think of it as humiliating.