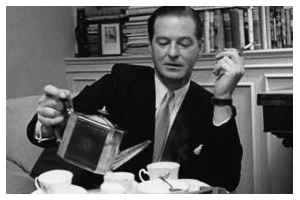 Playwright and critic, Terence Rattigan, wrote this eulogy for Vivien which was published in the New York Times.

Nowadays when we are asked to write about the death of a dearly loved friend, we are conscious that the present fashion tends sharply away from eulogy. Indeed, even the words, “dearly loved friend”, strictly accurate as they are in this particular context, are apt to offend modern ears, accustomed more to “assessments” than “appreciations.”

I was only one of many hundreds of men and women privileged to use these words about Vivien Leigh, and in any “assessment” of her character that single fact, not sentimental at all, must be salient. She had a gift for friendship—and I am conscious of the cliché but can’t avoid it—and it was her most outstanding characteristic. To know Vivien was to love her—to have loved Vivien was also to have been loved by her, and loved with a true devotion and a passionate loyalty that might well put your own wavering emotion to shame.

But this is to eulogize, and fashion must prevail. I must begin with Vivien’s faults. If I can think of any.

At the moment I can only think of two. One, though admittedly serious, purely professional; the other, not serious at all, purely non-professional.

As a tragic actress she somehow lacked the ability to project beyond stage or screen precisely that depth and warmth of emotion which off-stage and off-screen she so abundantly enjoyed. She couldn’t ever somehow convey love.

She could act love and acted, as she acted all things, with brilliance, dedication, and artistry, but somehow her Anna Karenina didn’t quite show the quality that it should have (think of Garbo), and her Cleopatra (think of Edith Evans) was never able to answer Antony’s suggestion that “to the boy Caesar” (she) “send this grizzled head” with the magical words “that head, My Lord?” and to convey by these magical words what Shakespeare must have meant to tell his audience: simply that, at this moment in the play, Cleopatra loved Antony more than life.

Other instances leap to mind but I will not recite them, for even an “assessment” is not an assault, and this view of Vivien’s emotional limitations as an actress is purely a personal one. It will surely be disagreed with by many more passionate devotees, I hope justly. But you must remember that there was no more passionate devotee of her than myself.

Now for the other, the minor and non-professional fault. That’s quite simple. If she were alive and had read the foregoing words she would have faced me with rage, those Siamese cat’s eyes blazing, those exquisite nostrils quivering, those imperious shoulders imperiously thrown back, and would, with firm and splendidly articulated certainty have announced her deep determination never to speak to me again as long as she lived; and so convincing an actress was she that I would have believed her. At least, until, about roughly twenty four hours later, I had received her inevitable phone call: “Darling?…Vivien. I can’t hate myself enough for being so cheap and petty last night. Of course you have every right to say whatever you think of me—if you really do think it”—and that beautiful clear voice would have caught a faint echo of Lady Teazle at her bitchiest—“but if anything I said made you the least unhappy I can only say that I am very, very sorry and quite in the wrong, and it is the Veuve Cliquot ’59 that you like isn’t it?…Right, there will be a case this morning…” and the voice would have reverted to Vivien Leigh’s.
The voice, too, would have been Vivien Leigh’s if she had read the amende honorable I intend to make now, to wit, that as a comedienne she was the most elegant, skilful and enchanting of any I have ever seen, and that as a serious actress her performances in A Streetcar Named Desire and Gone with the Wind, had made her quite likely to have been the “Hedda Gabler” of our time.

“Darling, you know quite well not a word of that is true, but how very sweet of you to say it! Now let’s all go in to lunch…” And every inflection of that perfectly modulated voice would have told me that she knew every word of it was true and that she rather despised me for stating the obvious.

So I revert to eulogy, frank and unashamed. Warm-hearted, loving and loyal, without a trace of envy or jealousy in her, she was hugely caring about other people’s troubles and, therefore, hugely cared for. We all know the kind of star who on floor or stage asks Fred, the assistant prop man’s mate, about his wife’s illness in a very loud and audible voice, and we usually know why she has done it and why she has so carefully memorized his name. Vivien might muddle the name, but she would talk to Fred unobserved and probably offer to send his wife to the best Harley Street specialist at her expense, provided always her name wasn’t mentioned. Later she would go visit the wife in the hospital, incognito and concerned.

When in 1953 she herself was taken seriously ill ad was in nursing homes for over six months, there wasn’t a single day during that time when she didn’t receive from her friend, Noel Coward, a letter, a postcard, a bunch of flowers, a scrap of paper—probably with an obscene joke on it—a present from Cartier’s, or a poem written especially for her.

I tell you this story not to show you what an exceptionally warm-hearted person noel Coward is, though if it does not show you that it only shows you the truth, but to show you the kind of devotion Vivien so effortlessly inspired in all her friends from the lowest to the highest.

It somehow seems sad that so marvelous and beautiful a person will be remembered by so many, many millions only as “that girl who played Scarlett O’Hara”.