Cleopatra hasn’t been on the throne of the pharoahs of Egypt very long when Julius Caesar pays a visit. Caesar finds the prospect of romance more tempting than he expected, since Cleopatra is a rare woman who is bright as well as beautiful. And for Cleopatra, a friendly relationship with the most powerful man in the world may pay dividends in the future. (imdb)

• Caesar and Cleopatra was, up until that time, the most expensive British film ever made. Based on the play by George Bernard Shaw (who also penned the screenplay), the film was marketed as a “prestige” picture by J. Arthur Rank. Vivien Leigh had very much wanted the play Cleopatra in a film version, and was more-or-less hand-picked by Shaw for the role owing to her kittenish looks and fiery temperament.

From the out-set, Caesar and Cleopatra was frought with problems for both cast and crew. Being filmed toward the end of WWII at London’s Denham Studios proved a precarious hazard. Bombs were often dropped near the set–one, according to biographer Hugo Vickers, nearly blew director Gabriel Pascal to pieces when it landed about 150 yards from where he was standing. Another problem was the weather. Though shooting began in June, it was quite cold and drafty on set, which caused problems for the actors who were dressed in thin costumes to portray life in Egypt. This was especially difficult for Vivien who had returned from an ENSA tour in North Africa not a year before in frail condition, having lost a good deal of weight while touring the desert entertaining troops.

George Bernard Shaw insisted on overseeing production, often being dissatisfied with costumes, make-up and the way his lines were being delivered by the cast. After the film wrapped, Shaw was allowed to view a preview with Gabriel Pascal and Kenneth Clark. He did not approve of Vivien’s performance, saying, “she’s ruined it,” although many critics at the time disagreed.

Shortly after filming began, Vivien discovered she was pregnant. This was something both she and Laurence Olivier had wanted from the outset–sealing their love for each other and their marriage. Gabriel Pascal was not happy with the news, and Vivien wrote to Leigh Holman telling him that everyone was being cross with her because how did she expect to portray a 16 year old in her condition? Pascal had the shooting schedule rearranged to film Vivien’s scenes first, and failed to hire a stunt double. During the scene where Cleopatra runs “up and down the Memphis Palace beating the slave,” Vivien slipped on the freshly polished studio floor. The fall caused her to miscarry the child she had desperately wanted. Though this is said to have triggered much larger problems, in terms of the film, Vivien was not enthusiastic about the part, though she did come back to finish her scenes. Stweart Granger, her co-star and friend, said she never forgave Gabriel Pascal and furitively tried to have him replaced as director, to no avail. Vivien did not attend the premier of the film in 1945. She was convalescing at Notley Abbey, and could not bring herself to view the film in its entirety for a number of years after its release. 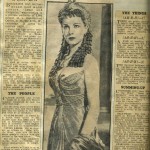 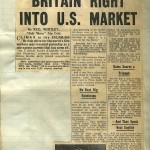 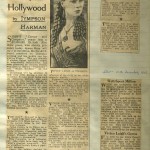 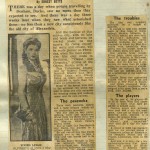 Into the Odeon, Marble Arch, newly conditioned as an Egyptian Temple, with figures of gods in niches, and a drop-curtain enscrolled with a map of of the harbour of Alexandria, into the Odeon, with a fanfare of trumpets, comes the million-and-a-quarter-pound Caesar and Cleopatra, the third and most ambitious of the Shaw plays produced by Gabriel Pascal. It would be pleasant to be able to say that the expenditure is reflected in a work that is nobler, wiser, or more sublime than other pictures; that it shines with a special beauty, or evokes an unusual stir of feeling. But, to my taste, Caesar and Cleopatra is a singularly cold triumph. It has authority, but Henry V was nobler. It has wit, but The Southerner had a deeper wisdom. It is handsome in an imperious way, but there is no beneficence in its beauty. I cannot recall one single moment that lights the screen and warms the heart like the shining candor of Our Vines Have Tender Grapes.

I have no doubt that there are many lovely and gracious things to be seen in Caesar and Cleopatra, if the eye were given time to discover them, but Mr. pascal is too stern a disciplinarian to dally with scenic effect when he has a message from Shaw to deliver…

What Shaw has created in Caesar and Cleopatra is a hero without drama, and a philosophy without love. It is essentially a one-man play; for his Cleopatra is essentially unactable, his Ftatateeta a grotesque, his Rufio a stooge, and his Brittanus a pantomime joke. Mr Shaw’s laughter is contemptuous, hut his Caesar is superb. He is hewn all in one piece, without a flaw or slip, out of a cold marble block. He is not a man to be loved, but to be admired; to be admired because he is sensible, not because he is good…

The complete Caesar is beyond the reach of all but the greatest actors, but Claude Raines manages some fine strokes in the graver passages; and by his looks, his bearing, and his voice he admits the possibility of a man who can be a hero by virtue of reason and not romance. Vivien Leigh’s Cleopatra seems drained of life beside him; there was more of Cleopatra in her Scarlett O’Hara than in this pale elf.

If sheer opulence were the test, Caesar and Cleopatra, the almost fabulous screen version of Mr Shaw’s play, would be the greatest film ever made.

With Mr Rank’s backing, Gabriel Pascal has lavished all the resources of the british film industry and some £1,300,000 thereby breaking records held successively by Ben Hur, Gone with the Wind, and Wilson.

No effort was spared, no cost too high. The sets are gigantic. Oliver Messel’s costumes are richly imaginative in Technicolor, for once agreeably restrained. Made, though it was, in difficult war-time conditions, Caesar and Cleopatra is as spectacular as anything the screen has ever given us.

Its merits as entertainment are another matter. There are scenes of real beauty, passages of fine and witty writing admirably delivered. Unfortunately there are also times when the comedy crosses the border line of whimsy, and the glory, such as it is, is lost in the Egyptian sands…

Then again, the average fan, misled by the title into expecting a love story from mr Shaw–what will he (and especially she) think of a story in which the hero is baldish and cold-blooded, and the romantic favorite of the moment, Stewart Granger, acts the part of the handsome big brother.

The reply may be that they will love it as they loved Pygmalion. The film’s fate is a bold and fascinating gamble not without instruction for the future.

Vivien leigh plays Cleopatra as the provocative child-minx portrayed by Mr Shaw, and looks enchanting; Claude Raines is a finely intelligent Caesar; and Flora Robson (Ftatateeta), Stewart Granger (Apollodorous), Basil Sidney (Rufio), and Cecil parker (Britannus) stand out in a cast so huge that Renee Asherson, who was under contract for about nine months, is no even mentioned among the 30 players on the programme. 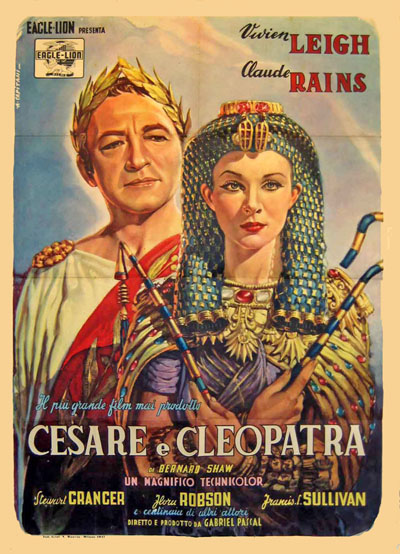