Progress report! The Richard Mangan Laurence Olivier Archive cataloguing project is going smoothly. I’m currently finishing up with box 3 and trying to keep ahead of the game so I can share regular progress reports with all of you. As mentioned in the post about Box 1, each item is catalogued in a spreadsheet, scanned (playbills and photos only at this point), placed in an archival-grade acid free sleeve, and then stored in a special archival box. I’m not sure why archival materials are so expensive, but they are, and I wouldn’t be able to undertake this project without the help of the lovely Viv and Larry Patrons. Thank you so much for your support!

I mentioned a few weeks ago that I’d recently purchased a major Laurence Olivier ephemera collection, which I’m currently in the process of repackaging and cataloguing — similar to what I did with the Vivien Leigh private photo albums. I always enjoy seeing other people’s collections, unboxing videos, reveals, etc. so I thought I would share some goodies from each portion of this project as I go along. 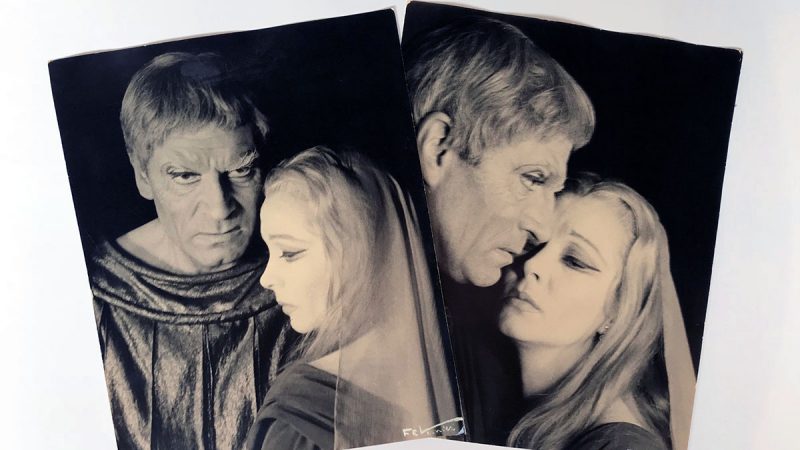 I’ve been collecting original Vivien Leigh (and Laurence Olivier, but mostly Vivien) memorabilia in earnest for about 10 years now. It began with vintage fan magazines and playbills, and gradually morphed into a focus on original photographs. For some reason I’m not really fussed about clothing, trinkets, or other 3D objects. It’s always been paper for me. Through collecting Vivien Leigh photos I’ve gained a deeper understanding and appreciation of photography in the mid-20th century and I’m particularly drawn to candid press photographs and snapshots – images that pull back the curtain on the glamorous public facade and show Vivien and those around her just being.

There are few things that give me as much pleasure as meeting kindred classic film-loving spirits. And I don’t just mean classic films in general (although, don’t get me wrong, that’s always amazing!), I mean people who share my enthusiasm for Vivien Leigh and Laurence Olivier specifically. I love blogging and maintaining this website because I’ve “met” a lot of really awesome people with whom I can talk about these things via email, facebook, twitter, etc. But the number of people I’ve met outside of the internet who really get it can be counted on one hand. Most people just can’t be bothered, and because I know this, a lot of times I feel shy or nervous about talking about it for fear of being laughed at or dismissed as a “crazy fan”. Yes, this is technically considered “fandom” and I know it’s looked down upon, at least within the film studies community (although, that’s not always the case, as I discovered after a chat with one of my film tutors last semester). But sometimes I tell myself, “Hey, at least I’m passionate about it, and I take it seriously while still having fun with it. Isn’t that all that matters?” I think that is all that matters.

Something extraordinary happened this week: I met not one, but two fellow fans right here in London!

Yesterday I had coffee near Holborn with Sameera, a lovely British girl who is working on her own epic project about Vivien Leigh. She got in touch with me via vivandlarry.com, we met over skinny lattes and ended up chatting about all things Larry and Vivien for hours! It was fabulous. I can’t wait to see the awesome things she’s cooking up!

Last Sunday, I met up with another fan of the site. Lena B., a gorgeous lady from Sweden has been sharing photos from her Vivien Leigh collection with the site since it launched back in 2007. You’ve probably seen them in the gallery! She was in London on holiday and we met in Covent Garden and had a lovely discussion about Larry and Vivien over croissants and coffee at Paul, my favorite  patisserie. Lena had an amazing gift for me: pretty much her entire collection of vintage Vivien Leigh magazines!

Can you believe it?! Seriously, how nice is that? I am still a bit overwhelmed by her generosity. I am not worthy! Lena thought I probably had most of them, but it turns out that I didn’t, and I didn’t even know some of them existed! I do already own some, so it’s likely you may see a few of these lovely publications pop up as contest prizes here on vivandlarry.com! They are definitely in good hands, and will be extremely useful for my dissertation, which I’m starting on as soon as I finish my current school assignments (which I would be more enthusiastic about if I wasn’t home sick with whatever nasty virus is going around right now). Thanks a million for being so kind, Lena!

It warms my heart that there are people who admire Larry and Vivien as much as I do, and who are eager to help spread the love! I am getting really excited about the meet up next month! I’m really curious to know: have you met other fans (of Larry or Vivien, Gone with the Wind, etc.) in real life? If so, where and what was it like? Tell us about it!