Progress report! The Richard Mangan Laurence Olivier Archive cataloguing project is going smoothly. I’m currently finishing up with box 3 and trying to keep ahead of the game so I can share regular progress reports with all of you. As mentioned in the post about Box 1, each item is catalogued in a spreadsheet, scanned (playbills and photos only at this point), placed in an archival-grade acid free sleeve, and then stored in a special archival box. I’m not sure why archival materials are so expensive, but they are, and I wouldn’t be able to undertake this project without the help of the lovely Viv and Larry Patrons. Thank you so much for your support!

Here are some of the highlights from Box 2, which covers Laurence Olivier’s theatre career from 1928 to 1933. 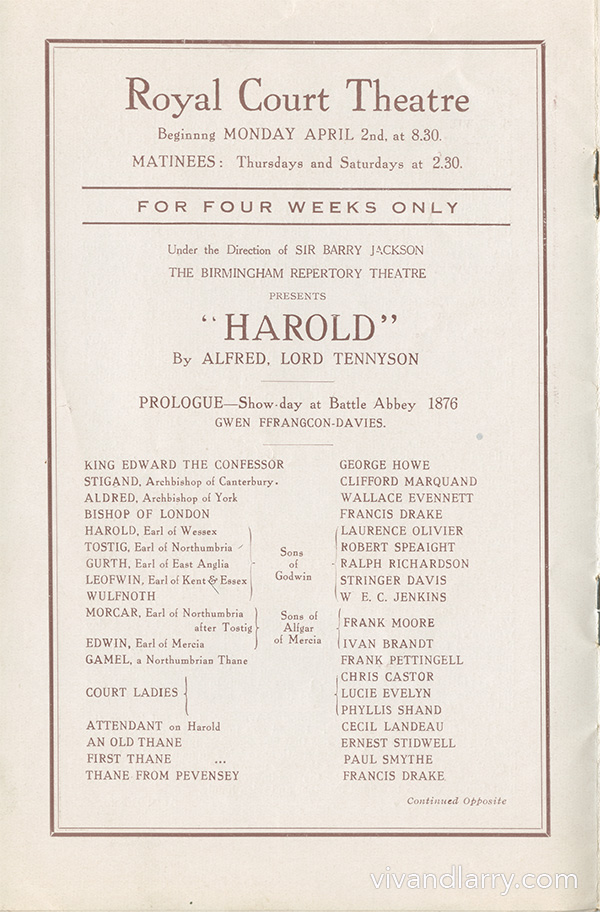 Harold, by Alfred, Lord Tennyson, was a Birmingham Repertory company play that transferred to London for a short season in April 1928. Notice Ralph Richardson also in the cast. Also interesting to note that Olivier’s association with the Royal Court Theatre began long before he appeared there as Archie Rice in The Entertainer.

The production received mixed reviews, with many critics considering it tiresome and boring. But the Daily Chronicle said, “The only things that really lived were the characters of Harold, beautifully and buoyantly played by Mr. Laurence Olivier, and the delicious Edith of Miss Gwen Ffrangcon-Davies, who is a joy always and whom, of course, Tennyson borrowed direct from Bulwer-Lytton’s novel.” According to the Evening Standard, “Mr. Laurence Olivier seemed a very boyish Harold and hardly a wielder of battle-axes, but he spoke the lines with vitality and conviction.” Ivor Brown said of Larry, “Mr. Lawrence [sic] Olivier’s task as Harold would have been easier had he possessed the stature of a Rugby forward instead of that of a three-quarter. But he did manage to dominate among the orgulous sons of Godwin and he kept the part marching.” I particularly like this mention in The Era from April 11, 1928: “Mr. Laurence Olivier succeeded in making the part of Harold a much more romantic and convincing figure than it is to read. He acted with such fine sincerity, infusing the speeches with vitality and conviction.

Maybe the comments about his size are what encouraged Larry to work out regularly? 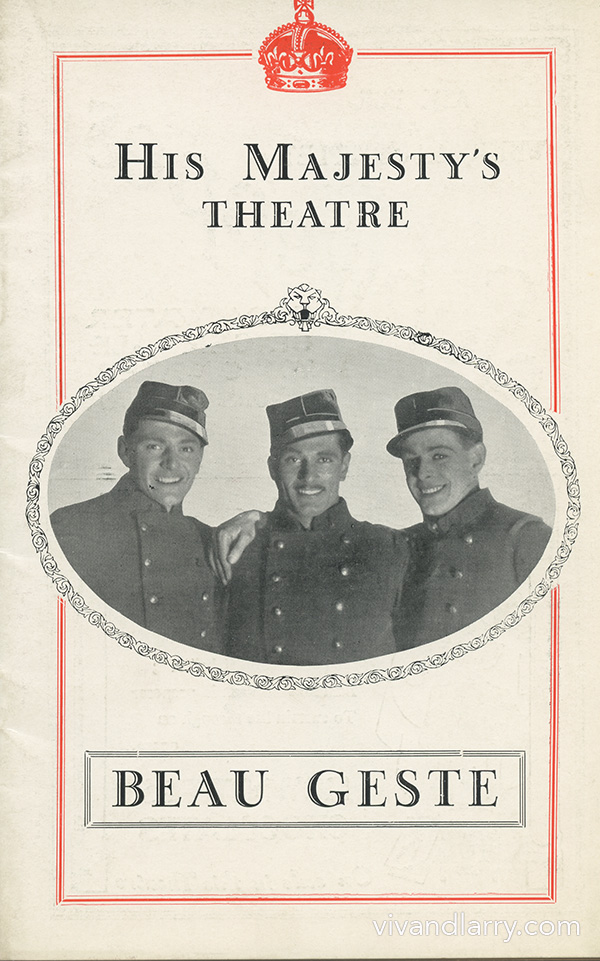 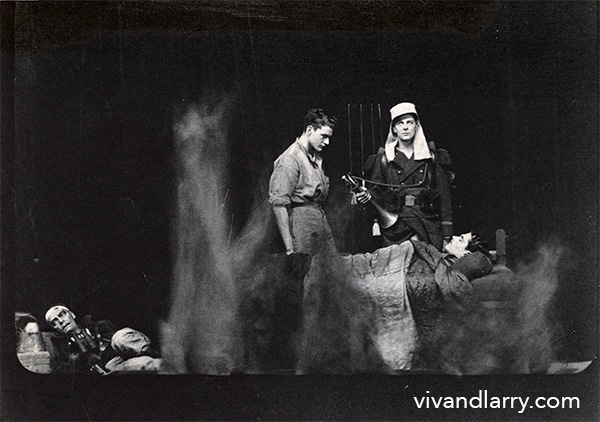 Based on his performance in a modern dress production of Macbeth at the Birmingham Rep., Laurence Olivier was recruited for the part of Stanhope in the R.C. Sherriff play Journey’s End. He left shortly after the premiere and took the lead in Beau Geste instead. But Beau Geste, though a popular film, flopped as a play, while Journey’s End went on to become a true classic with Colin Clive leading the cast. Larry is pictured above with Jack Hawkins (left) and Robin Irvine (centre) in Basil Dean’s production of Beau Geste.

Regarding Larry in Journey’s End, here’s what R.C. Sherriff recalled of the actor’s involvement (as told to Alan Dent):

About Olivier, my recollections are very clear because he was in fact the first actor that I saw in connection with “Journey’s End”. I expect you know about the troubles and anxieties we had in getting the play produced, and the casting of it for the first performance by the Stage Society was very difficult because no actor of any note wanted to play the part of Stanhope. James Whale, who was directing it, called me up one day to say that he had got a young actor named Olivier to play the part and asked me to go and see him acting in John Drinkwater’s “Bird in Hand”. My own idea of Stanhope was a lusty, very tough sort of type, and Olivier seemed to me rather too slightly built and modest for the part. Probably I thought this because he was playing a very thankless part in Drinkwater’s play, merely there, I assume, to play the love interest.

I remember at rehearsals that he was rather off-hand and casual, and I didn’t really think he was very interested. But his performance on the first Sunday night was magnificent, and I am quite sure that without him, the play would never have got such good notices, and would probably never have been produced again. I don’t really know what else to say, except that we were shattered when basil Dean engaged him to play in “Beau Geste”. And we were very lucky indeed to find Colin Clive to fill his place. Clive gave a totally different performance, much rougher, but in its own way a performance that made his name, and in fact gave the play what it needed for a public run.

I think Whale summed things up when he said of Stanhope’s most emotional scene: “When the curtain came down on Clive the audience applauded. When it came down on the same scene with Olivier they didn’t make a sound.” 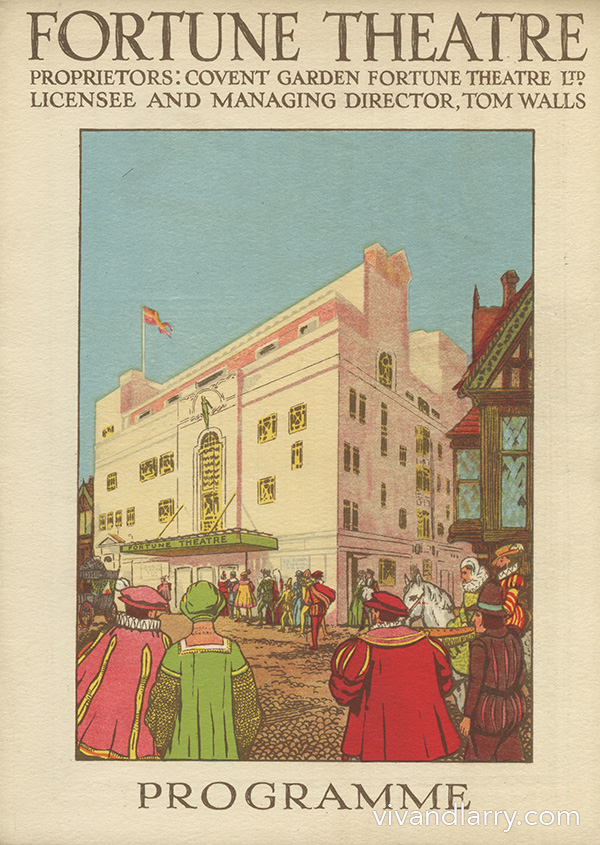 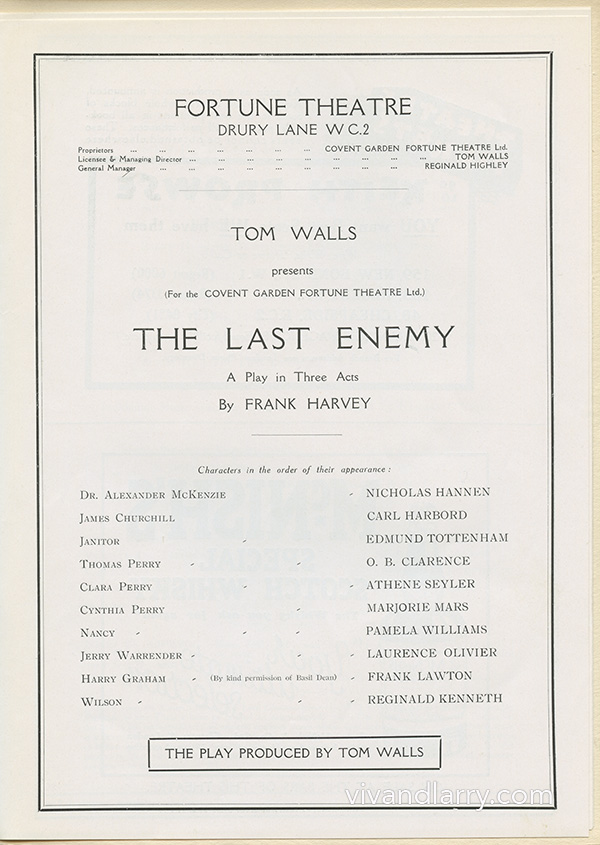 I’m sharing this programme because I love the cover. The Last Enemy is another play concerning the First World War. McKenzie and Churchill are two explorers who perish in the Arctic. When they arrive in Heaven they are told that they can influence people on Earth. Those over whom they exert their power include Jerry Warrender (Olivier) and Cynthia Perry (Marjorie Mars), a couple who, for some reason, needs reconciling despite Jerry being an attempted rapist. *Record scratch noise* Wait… It’s interesting to track Larry’s early association with actors that pop up later in his career. Most notable here is Athene Seyler. Nicholas Hannen (Seyler’s lover and later husband) joined Vivien Leigh on the ENSA Spring Party tour of North Africa in 1943.

One of my favorite items from Box 2 is this page from an autograph book. It contains the signatures of the cast of Private Lives (or “Private Lifes” as it says at the top of the page): Adrianne Allen, Gertrude Lawrence, Noel Coward and Laurence Olivier.

If you enjoy the content here at vivandlarry.com, please consider becoming a Viv and Larry Patron today. Click the banner below to find out more: