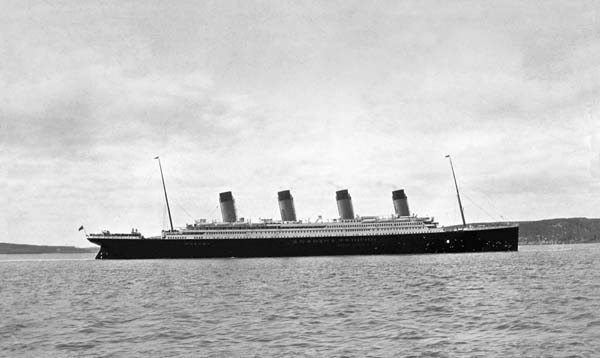 The RMS Titanic sails into Queenstown, Ireland before heading out to sea

On April 10, 1912, the RMS Titanic set sail from Southampton on her ill-fated maiden voyage to New York.  Built in Belfast by Harland and Wolff, Titanic and her sister ships the RMS Olympic and HMHS Britannic were the pride and joy of Liverpool’s White Star Line shipping company headed by J. Bruce Ismay and American financial tycoon J.P. Morgan. The ships were designed to be the last word in luxury transatlantic travel, and were in fierce competition with Cunard, based in Southampton (Cunard’s Lusitania was famously torpedoed and sunk by a German U-boat during the First World War). Not only was Titanic the largest and fastest passenger liner at sea, she was hailed as “unsinkable” — a towering metaphor for power and optimism during the industrial age.

More famous than the ship itself was the sad fate that befell it. In the late hours of April 14, 1912, Titanic struck an iceberg off the freezing coast of Newfoundland and sank, killing over 1500 people in one of the worst maritime disasters of the 20th century.  Like the Hindenburg, the Titanic has remained a source of morbid fascination for the past century. I, myself, have been interested in the story of the ship since I was a child. I remember doing a school project and flipping through an old copy of the issue of National Geographic that detailed Robert Ballard’s expedition to the bottom of the Atlantic and his discovery of the wreckage. For my 23rd birthday, a few of my close friends and I went to Las Vegas, where an exhibition of Titanic artifacts had been raised from the seabed and put on display in at the Tropicana. It evoked similar feelings to experiencing an exhibit about the Holocaust, for example. The reason for divers plundering the ship’s remains and displaying what they’ve found is understandable. The Titanic is rapidly disintigrating and will soon be nothing but a pile of rust at the bottom of the sea. 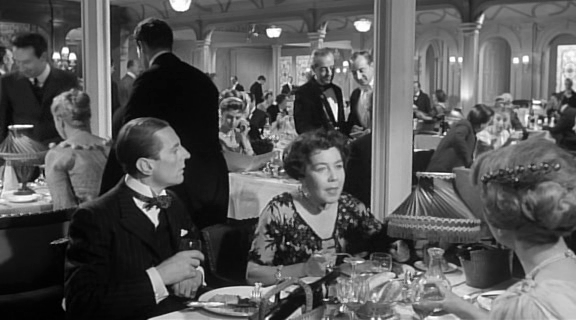 Over the past 100 years, Titanic has proven profitable source material for filmmakers. Just ask James Cameron, who basically took my entire life’s savings when I was 14. Although Cameron’s 1997 film has been the biggest moneymaker and is still fresh in everyone’s memories, especially now that it’s been re-released in cinemas in 3-D to mark Titanic’s centenary, Roy Ward Baker’s 1958 classic A Night to Remember is considered by many serious film folk to be the “best”. Drawing largely from Walter Lord’s book of the same title based on the official Titanic inquest, A Night to Remember has been praised for its historical accuracy, keeping the focus on the reality of the disaster rather than the mythology. 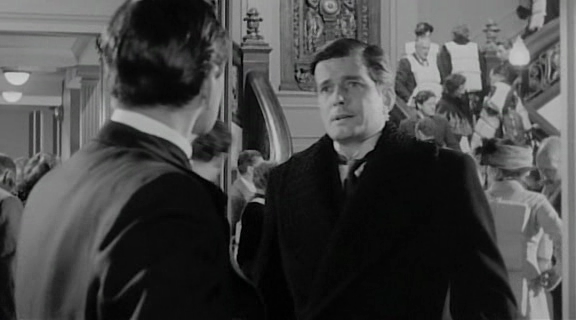 “I take it that you and I might be in the same boat later?” Robbie Lucas (John Merivale) and Thomas Andrews (Michael Goodliffe) stoically accept their fate

Baker’s film recalls the documentary realism movement that defined British cinema during the war years. It features wonderful performances by Kenneth More, John Merivale, Anthony Bushell, Honor Blackman and Michael Goodliffe, among others. The ship itself is the main character, and we see the human error that caused her demise from all angles. But what sets it apart from Hollywood renderings of the same story is its restraint.  It lacks the melodrama that permeates Cameron’s film and lets the horror of the tragedy speak for itself. No need for extra gimmickry to tug at audience’s heartstrings. 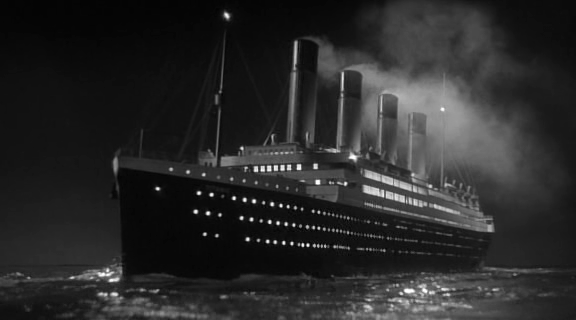 There are many similarities between Baker’s and Cameron’s films, aside from the obvious part about the sinking boat. The latter not only uses a good chunk of the dialog featured in A Night to Remember, but contains many very similar shots.  A minor but interesting difference worth noting is that A Night to Remember was filmed prior to Ballard’s discovery, so the ship is depicted sinking in-tact. Now we know it split in half while going down, as shown in Cameron’s film. In the end, however, comparing A Night to Remember and Cameron’s Titanic is as pointless as comparing Ken Burns’ The Civil War and Gone with the Wind. One presents historical facts as they were. The other is a fictional story set against a real historical backdrop. Which film floats your boat (pardon the pun) will depend on your keenness for realism vs romance. But A Night To Remember is an exceptional film, and a worthy one to watch to commemorate the 100th anniversary of Titanic’s tragic voyage.

Vivien Leigh: Made in Japan

Vivien Leigh and the Search For “Rebecca”