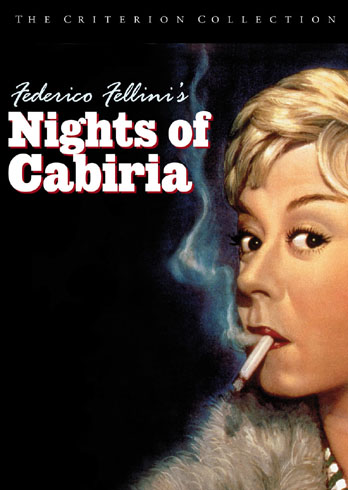 The first time I was properly introduced to the work of the man I often claim as my favorite film director was through a screening of the 1957 film Nights of Cabiria in a film history class in college.  I was immediately struck by Giulietta Masina who plays the main character, Cabiria (in real life she was Felini’s wife and they made a stellar team).  The film tells the story of a prostitute looking for love in all the wrong places; she is mistreated and abused by men she falls in love with, but she still keeps her chin up.  Director Federico Fellini modeled Cabiria after Charlie Chaplin’s famous derelict, and the film itself was inspired by Chaplin’s City Lights.  It is easy to see the comparisons.  Like Chaplin, Masina was expert at emoting with her face.  Like Chaplin’s endearing Tramp, we don’t want anything bad to happen to Cabiria because she is such a kind soul trapped by circumstance, a shining light of kindness in a cruel world.  It is heartbreaking to see Cabiria being treated so horribly by men in this film, and yet her positive attitude during times of trouble (read: the entire film) is very inspiring.

In a wonderfully insightful essay about the film, Fellini wrote:

“The subject of loneliness and the observation of the isolated person has always interested me. Even as a child, I couldn’t help but notice those who didn’t fit in for one reason or another—myself included. In life, and for my films, I have always been interested in the out-of-step. Curiously, it’s usually those who are either too smart or those who are too stupid who are left out. The difference is, the smart ones often isolate themselves, while the less intelligent ones are usually isolated by the others. In Nights of Cabiria, I explore the pride of one of those who has been excluded.”

Nights of Cabiria is a perfect example of Italian Neo-Realism, a movement that sprang up after WWII and showed the darker side of life after Fascism and the plight of many impoverished Italians.  Though other films of the time period showed bereavement in a more literal sense (Vittorio DeSica’s Bicycle Thieves and Umberto D, Rosselini’s Rome Open City, Fellini’s La Strada also starring Masina), Cabiria is perhaps more tragic in that we know our heroine is somehow doomed, and yet she keeps fighting, keeps smiling, keeps dancing (“Mamboooo!”), and keeps living, despite the weight of the world being on her small shoulders.  There is a beautiful scene when Cabiria is in a theatre in Rome and is called upon stage to be hypnotized.  She stands in a spotlight with her eyes closed and a small smile on her face, shrouded in her own fantasies.  It is a wonderful example of showing her isolation through images.

My favorite part of the film has got to be the ending, in fact, it’s my favorite ending of any film that I’ve ever seen.  It’s inconclusive, and we’re not really offered much closure, but Fellini’s trick of bringing Cabiria out of her diegetic world and into the world of the spectator is brilliant and through this we are offered a mixed feeling of hope (especially with the amazing music by Nino Rota in the final scene) and dread.  I think posting a clip of the end of the film here is okay.  Though it makes more sense in the context of the entire movie, it’s a beautiful scene in itself and speaks volumes of Fellini and Masina’s brilliance.  Observe:

“Cabiria is a victim, and any of us can be a victim at one time or another. Cabiria is, however, more of a victim personality than most. Yet even so, there is also the survivor in her. This film doesn’t have a resolution in the sense that there is a final scene in which the story reaches a conclusion so definitive that you no longer have to worry about Cabiria. I myself have worried about her fate ever since.”