“I shot an arrow in the air, she fell to earth in Berkeley Square”

My fascination with post-war British cinema keeps growing and growing!  For my birthday, I went on a small shopping spree at DVD Planet and picked up a few new Criterion DVDs for my collection.  One of these was Robert Hamer’s Kind Hearts and Coronets starring Dennis Price, Valerie Hobson, Joan Greenwood, and a whole lot of Alec Guinness.  This film was my first taste of Ealing Studios, one of the prominent British production studios in the 1940s and 50s.  Ealing was run by Michael Balcon (Daniel Day-Lewis’ grandfather) and was responsible for the output of such British classics as The Lavender Hill Mob, The Ladykillers, and Passport to Pimlico.  In 1944, Ealing was bought out by J.Arthur Rank, but Balcon remained studio chief until the 1960s.  One of Laurence Olivier’s first films–Perfect Understanding with Gloria Swanson–was filmed at Ealing under its first studio chief, Basil Dean (who would later direct Olivier with Vivien Leigh in 21 Days Together). 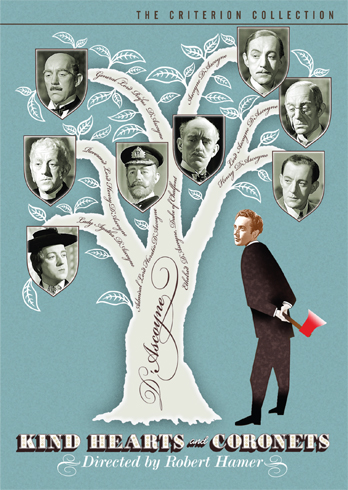 Kind Hearts and Coronets is a sinister and highly entertaining dark comedy involving a young man named Louis Mazzini (Dennis Price), a relative of the wealthy D’Ascoyne family whose mother was disowned for marrying beneath her.  Louis decides that the D’Ascoyne fortune is rightfully his, and plots to murder all eight D’Ascoynes (played by Alec Guinness) standing in the way to his immediate appointment to dukedom.  Alec Guinness is my favorite thing about this film, and is one of my new favorite people.  He plays eight characters in Kind Hearts and Coronets and it’s just brilliant because none of them are more over the top than the others, and he blends in so well!  Then of course there’s Dennis Price who is wonderfully wry in an understated performance, and Joan Greenwood, who is interesting all around, especially her voice.  I started watching her in The Importance of Being Ernest with Michael Redgrave last night at my friend Mark’s and can’t wait to see the rest.

Robert Hamer wrote and directed this film, and hats off to him because the script is so sharp.  One of the things I found particularly interesting is that I think this film is pretty racy for 1940s standards.  Granted, England didn’t have the Hayes Code to contend with, but in the documentary Made in Ealing (one of the special features on the Criterion DVD), Michael Balcon says that Ealing did not deal well with sex in films, and Kind Hearts and Coronets features an adulterous relationship and makes no qualms about it.

I really loved this movie and can’t wait to see more of the famous films that came out of Ealing.  Please put Kind Hearts and Coronets on your netflix queue if you haven’t yet seen it.  It’s a fabulous movie!

Well, I watched the new adaptation of REBECCA on N

Vivien Leigh and @sirnoelcoward at the London Prem

Vivien Leigh and Charles Laughton on the cover of

“I have had no sleep since the night before last

Because you deserve it. Happy Monday! 🤓💙 Lau

The Oliviers at home in London with their cat Tiss

Laurence Olivier and Vivien Leigh as Romeo and Jul

Such a touching photo of Vivien and Cole Lesley at

I love getting treasures in the mail and I love th

Larry Olivier and Vivien Leigh as Romeo and Juliet