WARNING: This post reveals the super-secret secret of Secret Cinema. Read at your own risk.

Last night I had the pleasure of attending Secret Cinema, an interactive, cult film event put on by Future Cineama. The aim of the game is to completely immerse the audience in the atmosphere of the film they will be screening. The gimmick is that audiences aren’t notified of where it will be screened or what they will be watching. Once signed up on the website, participants are given clues such as what to wear and where to meet at a designated date–tell no one! 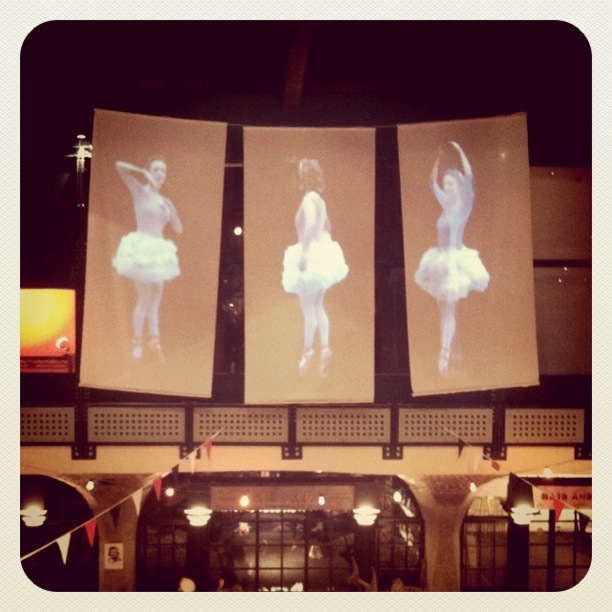 I decided to go with my classmate Nelly as part of our London Film Cultures course. We were to meet at Wapping Station in East London at 6:30 pm. It was an “Unknown Cultural Movement” and people wanted the freedom to create. 1940s was the dress code. Actors, musicians, and writers were to bring their talent. We got to Wapping and about 10 minutes after arrival (there were 1940s “Bobby’s” patrolling the area) a group of vintage-clad actors came parading around the corner chanting “Freedom! Freedom! Freedom to Create!” We followed and were handed a sort-of newspaper about the Unknown Cultural Movement, dated 1948. It was black, white and red, so my first thought was that the film might possibly be something like 1984 or Farenheit 451.

We stopped first in a park where we danced to the tune of a violin and someone demonstrated how to do the Lindy Hop! We were then led to our final destination: The Tobacco Dock, a giant warehouse in Wapping. An actor came by and asked us whether we wanted a ticket to the Drury Lane Theatre or the London Coliseum. We chose the Coliseum and made our way inside where we were suddenly swept back in time to Covent Garden circa 1948. Ballet dancing was being taught upstairs, and actors were having their make-up done before the big performance. Going downstairs (after procuring some liquor at the bar and admiring the performances), we were transported to the streets of Paris. 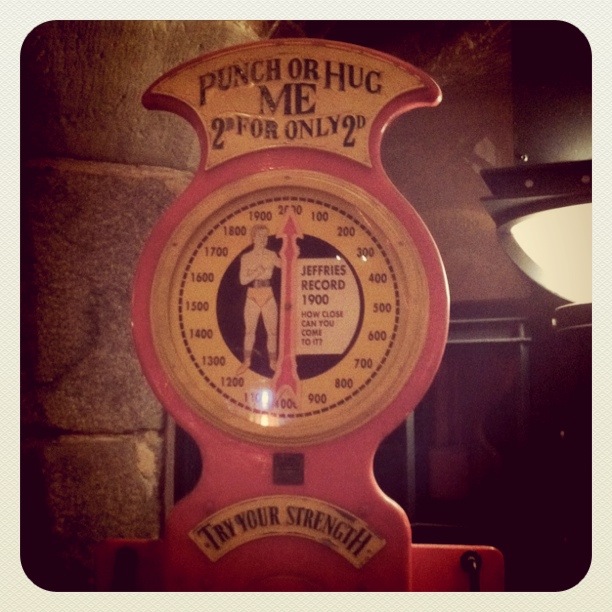 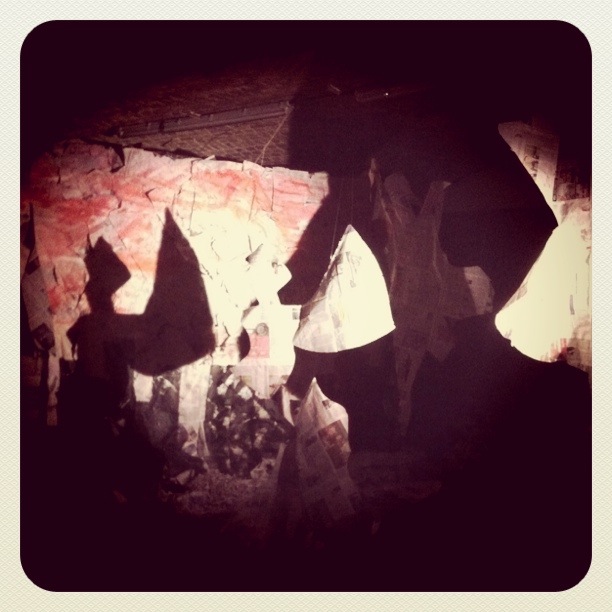 Winding through the “streets”, we were able to take part in the creative process, doing everything from painting to dancing to making music and writing.  The “shop fronts” were filled with vintage ephemera from clothes to theatre playbills, and confectioners were selling sweets out of old carts–all in character, of course! 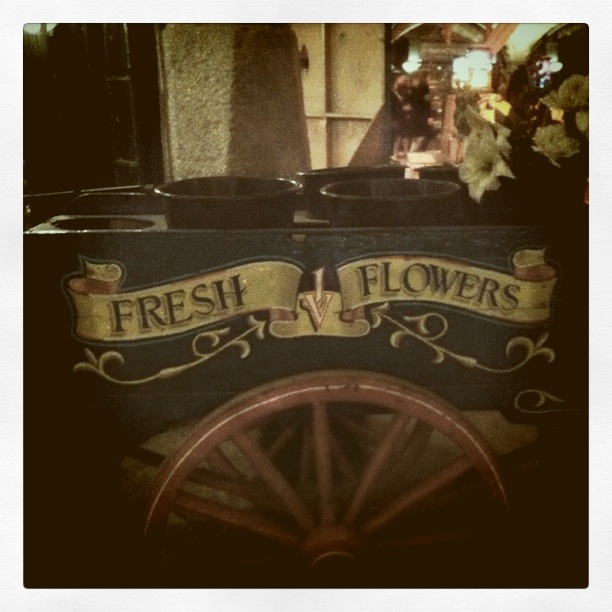 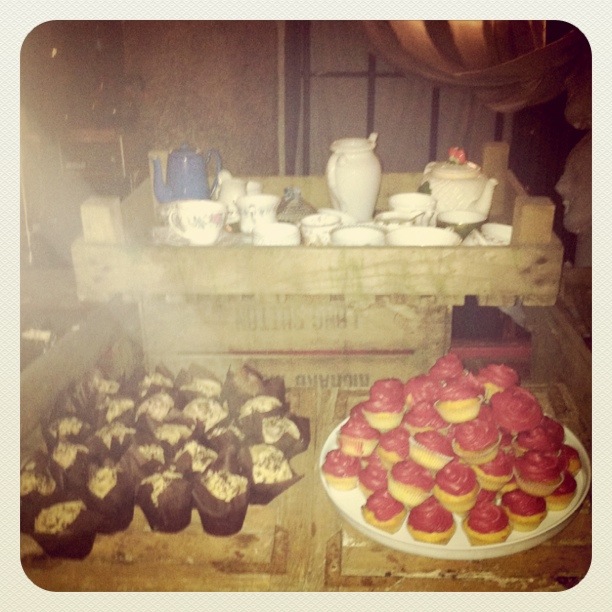 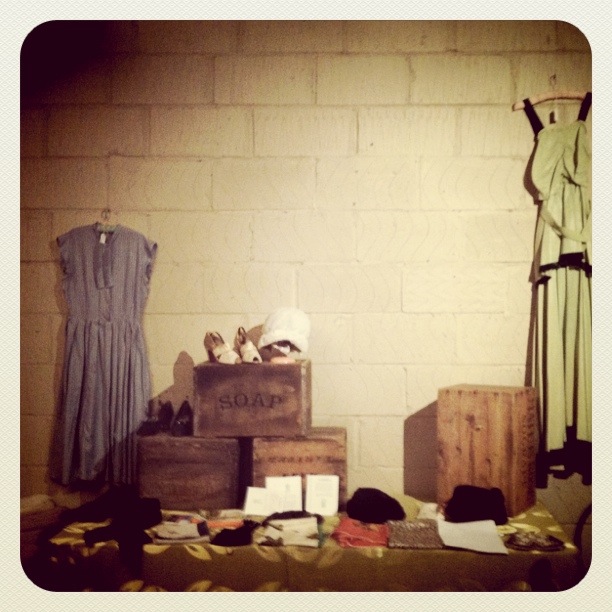 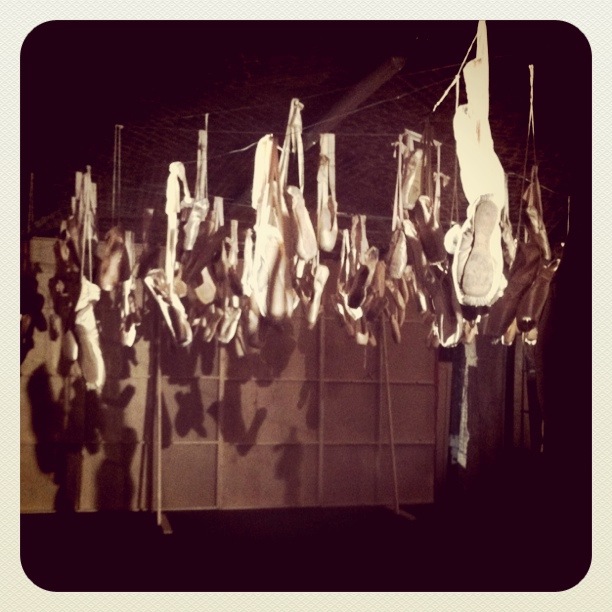 As we were wandering around, I kept trying to figure out what we could possibly be watching. Then, we wandered into a haunting paper forest where paper people were dancing, and it suddenly hit me! More and more clues confirmed my suspicions and my excitement increased dramatically (it is, after all, one of my favorite films). Suddenly, Grischa and Vicky Page were dancing in the Parisian Square; The Ballet Lermontov was in season! We were given a dance performance before Boris Lermontov himself told us how he asked Vicky why she wanted to dance. Dancing was life, she said. 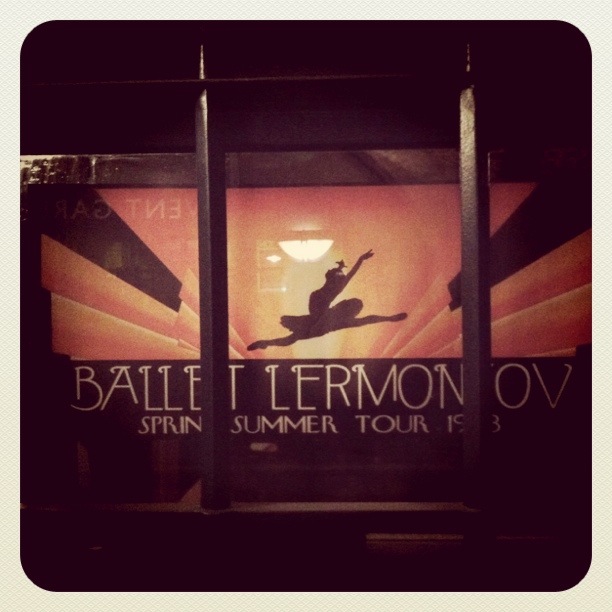 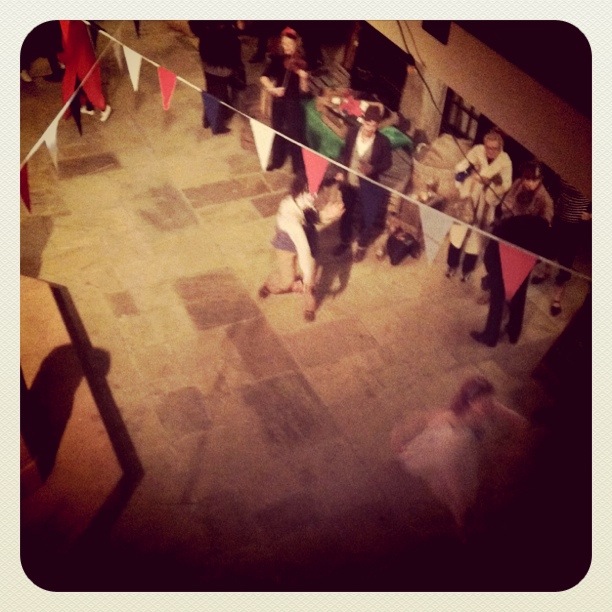 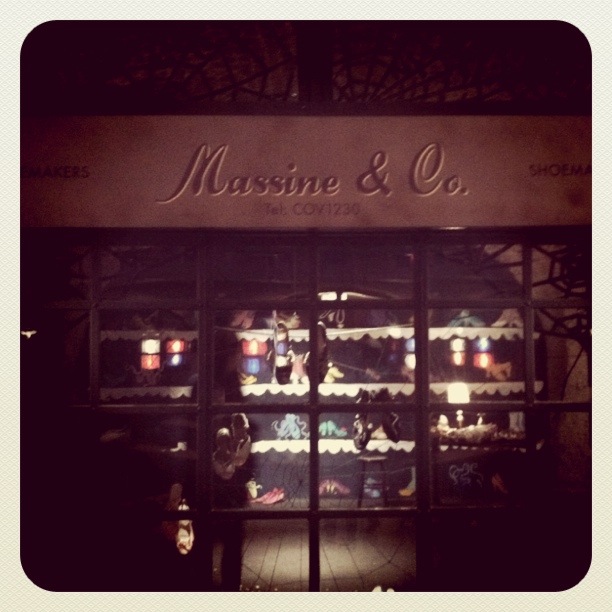 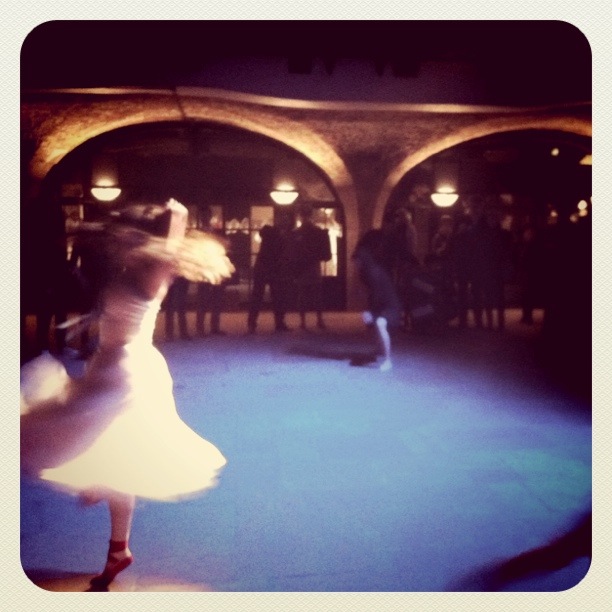 We finally filed into the “London Coliseum” and took our seats. There was a short film screening before the feature called Danse Macabre, a morbid but oddly beautiful film about the final dance of death. Then, Boris announced to us that Miss page was unable to perform that night, or any night after, but that they would perform because Vicky would have wished it. The curtains were pulled back and the famous Rank gong sounded, the Archers logo appeared on the screen, and a few of us enthusiastic fans let out a “whooo!”

The Red Shoes, Michael Powell and Emeric Pressburger’s 1948 masterpiece of art and cinema, is one of my top 10 favorite movies of all time. The plot revolves around Victoria Page, an eager ballet dancer played by the lovely Moira Shearer, an eager young composer anmed Julian Craster, (Marius Goring), and the obsessive ballet impresario Boris Lermontov played expertly by Anton Walbrook. For Lermontov, his ballet is life and only dancers who share the same enthusiasm are let into his company as prima ballerinas. There is no room for outside romance, dreaming, or anything that will take his star’s mind off of her passion for dancing. Vicky joins the Ballet Lermontov as a back-up dancer to Irina Boronskaja (Ludmilla Tcherina), showing great passion and promise. When Irina marries and is dismissed from the company, Vicky is promoted to prima ballerina, given the leading role in a new ballet based on Hans Christian Andersen’s The Red Shoes. Dancing opposite her are Grischa Ljubov (Played by Leonide Massine–former choreographer for Serge Diagalev and the Ballet Russe) and Ivan Boleslawsky (played by Australian ballet dancer and actor Robert Helpmann). Vicky quickly becomes famous, but falls in love with Julian Craster, and is pulled between her love for ballet (and the ruthless Lermontov) and her love for Julian. The consequences are tragic.

This is a beautiful film, nominated for the Best Picture Academy Award of 1948 (it lost to Laurence Olivier’s Hamlet) which combines the realism of what life is like backstage at the ballet with brilliant fantasy/art scenarios. Veteran Powell and Pressburger cinematographer Jack Cardiff created stunning scenes revolving around Hein Heckroth’s dream-like sets and location shooting in Covent Garden, Monte Carlo and Paris. Like many of Powell and Pressburger’s films made after the war, The Red Shoes makes expert use of Technicolor. The make-up and costumes add extra vibrancy to this lurid tale of living for one’s art. But it is perhaps the performances that make this film so great. Marius Goring (who appeared in several Powell and Pressburgr films–most notably as Conductor 71 in A Matter of Life and Death) and Mora Shearer shine, but the best performance by far is given by Anton Walbrook (when is he not amazing?!).

If you haven’t see this film, I urge you to go out immediately and rent it. Savor it. It’s beautiful.

Secret Cinema was amazing. It was clear that a lot of hard work went in to making it a vibrant and life-like experience. I’d love to go again!

This song reminds me of the film: Camille Saint-Saens–Danse Macabre