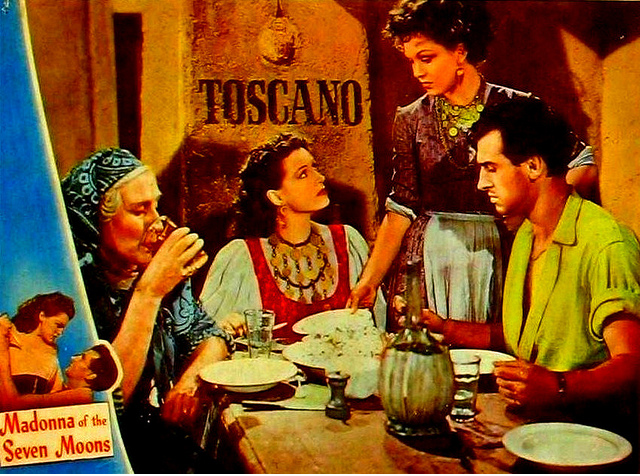 This week in Brit. Cinema, we discussed escapism as an alternative to the “documentary-realist” films made during WWII. Most studios were making film upon film about the war to remind people of what war was really like, despite audiences experiencing such events with a much more heightened sense of reality than the film business could portray. But one British studio provided escapism in bulk. Gainsborough Pictures, the former sister company of British-Gaumont became famous for producing lavish, saucy costume dramas that were aimed at a female audience and were often adapted from recently published romantic novels. Founded by Ealing’s Michael Balcon, Gainsborough also employed some of the biggest stars of the 1940s, including Margaret Lockwood, James Mason, Stewart Granger, Phyllis Calvert and Patricia Roc.

The films produced at Gainsborough during and shortly after the war were some of the most financially successful of their time. They were also panned by critics who thought them the antithesis of everything they wanted British film to be. The main ingredients prevalent in these films that was missing from the realist films of the time were sex and heightened emotions. What Gainsborough melodramas lacked in “quality” traits like stoicism and restraint, The Wicked Lady, The Man in Grey, Fanny By Gaslight, Jassy and other similar titles more than made up for it in sex appeal, strong female characters, nostalgia and fantasy:

In short, the traditional British social rulebook had been torn up, and Gainsborough responded to these developments in two quite distinct ways – by making films exploring women’s lives both during wartime and afterwards, and by creating shamelessly escapist fantasies, usually set in the distant past, that offered powerful images of female independence and rebellion that resonated deeply with audiences of the time. (screenonline)

Arthur Crabtree’s 1944 film Madonna of the Seven Moons is a fanciful story of a pious young Italian woman named Maddalena (Phyllis Calvert) who, as a young maiden, is raped in the woods by a man who looks like he’d jumped straight out of an FBI’s Most Wanted poster. Maddalena is taken in by the nuns at a local convent where she becomes the picture of virtue before being handed over in marriage to the wealthy Guiseppe Labardi. Flash forward twenty years and Maddalena is still mentally scarred by the incident in the woods. The return of her daughter Angela (Patricia Roc) from school in London triggers a long-kept secret. Maddalena periodically develops amnesia and disappears to Florence where she lives a double life as Rosanna of the Seven Moons, a free-living gypsy who has a torrid love affair with a jewel thief named Nino (Stewart Granger). Maddalena/Rosanna is never aware of her alternate personality, and, when asked, can never produce an answer as to where she’s been. When Angela goes searching for her mother, she is assisted by Nino’s brother Sandro (Peter Glenville) whose intentions for Angela are sinister. Angela’s ignorance of the situation eventually leads her to her mother, but puts Maddalena/Rosanna’s life in danger. As is the custom in classic films–to a lesser extent in Britain compared to the Hollywood Production Code, but still true none the less–bad girls are ultimately punished for their misdeeds, no matter how virtuous they may have been otherwise.

While I didn’t think the film was as ridiculous or as unintentionally funny as The Wicked Lady, it was still very strange. However, there were some things that stuck out for me:

1) The fact that Stewart Granger never buttoned his shirt. It’s true that Granger was the male sex symbol of the moment, and my guess is that Arthur Crabtree wanted to showcase his chest to distract viewers from his silly court jester costumes. Or maybe not.

The BFI’s Monthly Film Bulletin said of the film:

Artistic settings beautifully photographed are a pleasing feature of this lavish production, but they cannot disguise the crude melodramatics of the story nor the fact that the film drags, despite its bursts of robust action. The players act well to a certain degree and yet they somehow fail to give convincing studies of the Italian characters they are meant to portray.

Actors failing to portray–in any way, shape, or form–the actual nationality of the character they are playing is the bane of many classic films. But perhaps there is an inherent suspension of disbelief when we watch a film like Madonna of the Seven Moons today. Not only is the story set far in the past, but the passage of time from when the film was initially released to today also aids in this. Maybe we have come to expect this sort of thing from older films? I can think of plenty examples of actors in classic films not even trying to put on a different accent as required by the character they were portraying (Clark Gable in Gone with the Wind, anyone?), but it usually doesn’t affect my overall enjoyment of a film.  Where Madonna really fails is in the plot. It’s about as bizarre as the theremin that periodically pops up in the soundtrack to signal Maddalena’s transformation into Rosanna…or aliens coming to inhabit 18th Century Italy.