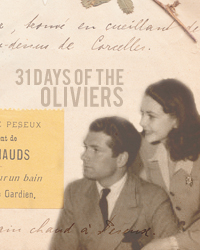 {Day 2} In 1937, Picturegoer and Film Weekly declared Vivien Leigh the most “important recruit British films have ever had,” and insisted that it was the job of the British film studios to develop her on her home turf so as not to lose her to their Hollywood rivals. As I argued in my dissertation, although the “industry” may have wanted to make her a star in Britain, neither she nor Alexander Korda put much effort into making that happen. Her desire to differentiate herself as an “actress” versus simply being a “film star,” along with her being cast in “non-British” roles prevented her from ever reaching the height of stardom during the 1930s. She resisted conforming to the middlebrow values that made people like Gracie Fields, Jessie Matthews and George Formby so popular.

It has taken Vivien Leigh nearly four years to reconcile herself to a screen career.

At one time she didn’t attempt to conceal the fact that she wasn’t in the least satisfied with herself as a film actress or with her pictures. Today, after A Yank at Oxford and St. Martin’s Lane, and with The Thief of Bagdad in the offing, she is very much happier about herself and the screen. It was with a sigh of relief that I heard her say this.

Almost a couple of years ago, when writing about her in Film Weekly, I said: “She is, I should say, the most important recruit British films have ever had. If only she can be kept from taking herself too seriously. Her career is at a critical stage.”

But I was scared stiff at the time that, owing to her passionate interest in the stage and dissatisfaction with herself on the screen, we should be losing her.

Increased Popularity
Fortunately, my fears haven’t been realized. She had progressed a lot, because of the quality of parts, not quantity. Her popularity has increased enormously.

Although she was “the other woman” in A Yank at Oxford, the role did her a tremendous lot of good. Her ambitious, Cockney dancer in St. Martin’s Lane has received even more enthusiastic notices. I believe Alexander Korda considers her to be this country’s biggest potential star. Unless I am mistaken, he will be paying a lot of attention to her in the future. She is still keenly interested in the stage and, in fact, is appearing in “A Midsummer Night’s Dream” at the Old Vic.

“But,” she admitted, “I have liked films very much more recently, although I’m never satisfied with myself when I see my pictures.”

Unsympathetic Parts
She smiled. “Probably I shall never be! but I do feel that I am getting some better opportunities. Quite a number of people were surprised when I appeared as a vamp in A Yank at Oxford and took an unsympathetic part in St. Martin’s Lane. But in both cases I felt that the roles were interesting and out of the rut. Since the films have been shown, the letters I have received have proved that I was right. Most of the letters say how glad the writers are that I have not confined myself entirely to pretty heroine characters.”

I commented on the fact that, for a girl often described as one of our most glamorous actresses, she didn’t seem to bother in the least about looking unglamorous–as, for instance, in her crying scene toward the end of A Yank at Oxford.

The Cockney Accent
“What of it?” she wanted to know. “The very thing I am trying to avoid is being typed as a glamour girl. Quite honestly, I don’t mind what type of role I have, so long as it is interesting. I’ve no particular preference. And I am taking advantage of the increasing confidence in the theory that acting does tell in the long run.” She was lucky to have got her role in St. martin’s Lane. The original intention was to have an unknown girl for the part:

After dozens of tests, Laughton and Pommer gave up the idea as hopeless. They couldn’t find anyone suitable. Then Laughton remembered Vivien Leigh. A few years ago she was to have appeared in Cyrano which, after a lot of preliminary work, was dropped. Before the plan failed, he and Vivien rehearsed a lot of the scenes (in French, incidentally, for the English translation was not available at the time).

The only criticism Vivien has received about her work in St. Martin’s Lane is that her cockney accent is not quite perfect.

She defended herself on this point when I brought it up:

“You see,” she explained, “I was told to ‘tone it down.’ After I had spent a long time learning how to speak Cockney, I was told that most audiences won’t be able to understand the accent, so it was necessary to use a certain amount of compromise.

“We redubbed the whole of the film for America, by the way, and in the American version we used straight-forward voices, without an accent at all.”

Change of Plans
Talking of America, I asked her if she could clear up one or two current mysteries. It was announced not too long ago that, following a big demand for her to be featured again with Conrad Veidt, with whom she had appeared in Dark Journey, she would co-star with him in Spy in Black. But Spy in Black has gone into production with valerie Hobson in the role instead.

It was also announced that she was going to America for a play; but she hasn’t gone, and is now tied to this country with her Old Vic engagement and the forthcoming Thief of Bagdad.

Play Postponed
“One thing is responsible for the other,” she explained. “It was all fixed up for ,e to play in Spy in Black, and then came this opportunity to appear in New York. I liked the idea so much that I asked Mr. Korda to release me from the film. He agreed. No sooner had Spy in Black gone into production than I received a cable from America saying the play had been postponed indefinitely. I had even booked my passage. So all my plans were hopelessly messed up.”

I remembered that several American companies had tried to sign her up.

“What about Hollywood?” I asked. “Are you likely to go there?”

She shook her head.

Hollywood Offers
“I don’t think so. The trouble is that Hollywood seems to be interested in me only as a long-term contract actress. And I have no intention of tying myself for several years to any one company, particularly in Hollywood, where it would be difficult to take stage engagements between films. I am not going to neglect the stage, whatever happens. Besides, how can I sign a long-term contract? My contract with Alexander Korda is for two films a year, and it still has more than a year to run.

“I should like to go to Hollywood to make one film–and then, perhaps, to go there later on for other pictures at different times.”

So that’s one risk obviated–we are not likely to lose this English Star to America! And when Vivien Leigh makes up her mind about a thing, she is as obstinate as Robert Donat.

Reverting to Conrad Veidt for a moment, I’m afraid those filmgoers who asked him to be co-starred with Vivien Leigh again are going to be disappointed when they see The Thief of Bagdad. For, although Veidt is going to be in the picture, he and Vivien will not be opposite each other.

She Has It Both Ways
I still think Vivien Leigh is the most promising young screen actress we have in this country. Her progress has been slow but thoroughly satisfactory. On looks and personality alone, she could undoubtedly succeed. But, curiously enough, these are two things on which she doesn’t want to rely. She had always wanted to become a good actress, and that’s not just a “line”, I know it to be a fact. Acting does mean everything to her.

So, she has it both ways–an appeal for those who are interested solely in seeing a pretty girl on the screen, and those with more discernment who appreciate acting more than looks. But I think that most of the latter appreciate a girl even more when she has both qualities!