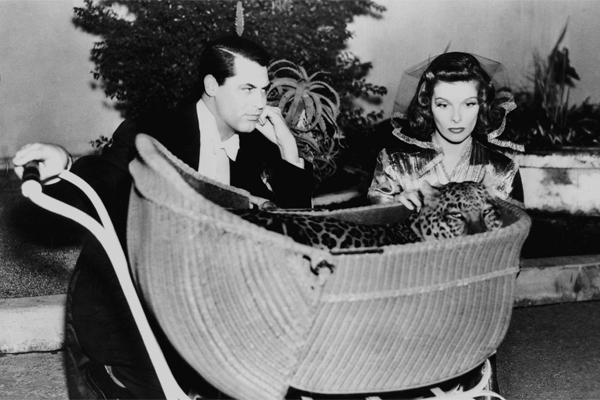 Tonight was the first time I’d gone to the cinema in months.  I just haven’t had time with the holidays and essay writing, but since I handed in my last essay of the first semester today, it was definitely time to remedy my cinema-going situation.  One of my classmates was celebrating his birthday, so I went with him and a few other people from the film programme at KCL to see Bringing Up Baby, part of the current Howard Hawks season at the BFI.

Bringing Up Baby (starring Cary Grant and Katharine Hepburn before they both got super-famous) is one of the ultimate screwball comedies, and was one of the first classic films I remember ever seeing.  It’s the story of zoologist David Huxley (Grant), a clumsy museum big shot who gets mixed up with a rather insane heiress named Susan Vance–one of the most annoying characters in cinema, if you ask me, although I think Hepburn gives a good performance.  It’s surprising that she and David get together in the end, considering how annoying he found her throughout the film!  As one person in our group said afterword, “I would have done more than step on her foot.”  She’s like a 1930s Rita Leeds (aka Charlize Theron on Arrested Development, minus the faux British accent).  “I was born on the side of a hill.  Look at me walk.  Look at me walk.”

Peter Swaab, the author of the new BFI classics book about the film, was on hand to give a pre-film introduction.  It was interesting to learn that Howard Hawks was married to Norma Shearer’s sister Athole, and that Athole suffered from bipolar disorder.  He said that given Hawks’ personal situation, it’s interesting that mental illness, or insanity, is treated so lightly in the film.  It’s like a long running joke.

Despite this, I quite like the film and think some of the nuances are hilarious!  Plus, Cary Grant in Clark Kent glasses?  Hello!

I’m sure many of you lovely readers have seen Bringing Up Baby.  I’d love to hear your opinions on the film!