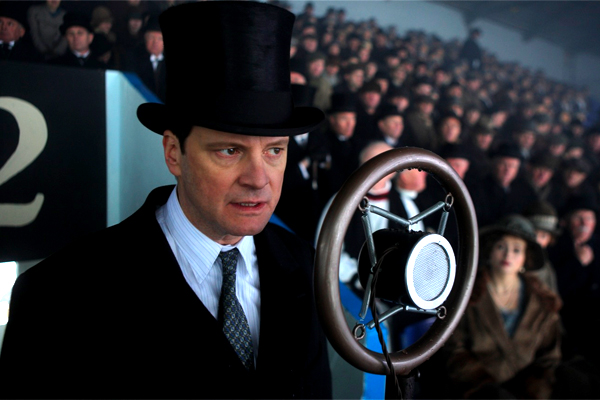 This semester I’m taking a class called “Their finest hour and a half: British cinema in WWII” at University College London, and for our first screening today we saw a 1943 Ealing Studios film starring Ann Todd and Leslie Banks called Ships with Wings.  It dealt with the Fleet Air Arm fighting the Nazis in Greece, and wasn’t all-together very good.

As a sort of companion film, I went to the Odeon Leicester Square tonight with a friend to see Tom Hooper’s new film The King’s Speech starring Colin Firth, Geoffrey Rush and Helena Bonham-Carter.  It concerned King George VI, otherwise known as Price Albert, the Duke of York, who ascended to the throne of England after his brother Edward VIII abdicated in order to marry Wallis Simpson.  Bertie was plagued with ill health and a speech impediment stemming from childhood traumas, and when he was older saw several doctors to try and cure his stammer before settling on the unconventional but effective treatment methods of Lionel Logue.  Lionel helped George to gain a public speaking voice, which he used to address England and the commonwealth in a famous speech about being at war with Germany.

This movie is pure heritage at its finest.  1930s England was recreated beautifully, and the costumes, hairstyles, and sets were gorgeous.  I also quite liked the message of the underdog gaining enough self-confidence to become a great leader.  Colin Firth and Geoffrey Rush were excellent, as usual (Colin Firth needs to keep doing these 40s-50s period films, I’m loving them!  Especially A Single Man).  The cinematography and music were also brilliant.

Quite a few people had told me I needed to see this film because it was right up my ally, and they were correct, as always!  Thanks to everyone who recommended it; it was lovely!  Go see it!

The Oliviers in Shakespeare’s TITUS ANDRONICUS a

Vivien Leigh bathes in the Mediterranean at Tripol

“She had a gift for friendship—and I am consci

When your work colleagues throw you a virtual baby

Vivien and director Mervyn LeRoy play a game of Ch

The Oliviers in George Bernard Shaw’s CAESAR AND

I love behind the scenes photos from classic films