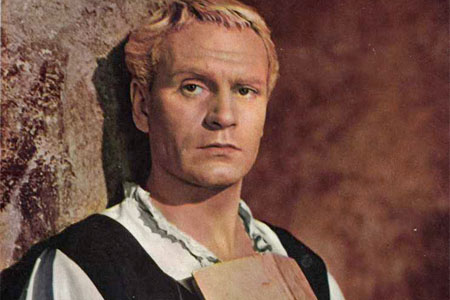 I was sent an email from one of the film professors at King’s College London (where I’m currently studying) regarding a upcoming colloquium and National Theatre event (October 30, 2010) to kickstart the recent renewed appreciation for Laurence Olivier’s Shakespeare films among film scholars.

The colloquium is called Olivier’s Shakespeare: Violence and Memory, and it will feature prominent scholars from all over England talking about the different facets of Olivier’s impact on film and British national identity.  The special guest will be Helga Keller, the woman who edited both Henry V and Hamlet.  After the colloquium, the National Theatre Studio will be hosting an event featuring writers, critics, actors and directors who worked with Larry under his directorship of the National Theatre or who have written about his life and work.

To book a spot at the KCL colloquium (£45), email shakespeare@kcl.ac.uk

I’m really excited about this!  I had no idea that the BFI has just restored Olivier’s Shakespeare trilogy, or that there was a renewed interest in this work among academics.  It’s as it should be, though, because Laurence Olivier had such a huge impact on theatre, cinema, and culture in Britain during the 1940s and 50s.  Well done, Sir, well done.

If you’re in London, I strongly encourage you to attend one or both of these events, and I will definitely see you there.