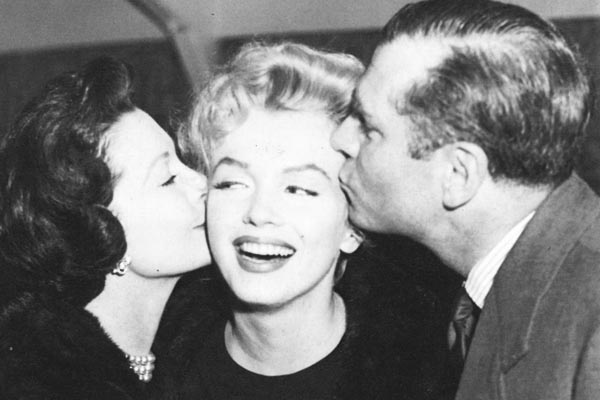 Almost everyone who knows me and my taste in films/my appreciation for Laurence Olivier and Vivien Leigh predicted I’d hate My Week with Marilyn, the debut film by director Simon Curtis based on the diaries of Colin Clark. They were right – to a point. The film as a whole is pretty entertaining. I laughed quite a bit (although not always during moments that are supposed to be funny). But I also found myself saying, “what?” and “really?” more often than not. You see, I gave an honest go at having no, or at least low, expectations. I knew it wasn’t going to be a masterpiece of cinema, so it was better than I expected. But from a fan perspective, I wouldn’t call it a “good” film. Not by a long shot.

Clark’s diaries, published as The Prince, The Showgirl and Me (see the documentary made from the book) and My Week with Marilyn were combined to form the basis of the script. Clark (Eddie Redmayne) had family connections to the film industry. His father, Kenneth, was a famous and very wealthy art historian who was the director of the National Gallery and head of the Ministry of Information Films Division during the war. He was also good friends with the Oliviers. When Colin expressed interest in going into filmmaking, Vivien Leigh (Julia Ormond) persuaded Laurence Olivier (Kenneth Branagh) to give him a job on her husband’s next picture, The Prince and The Showgirl, in which he was set to co-star with Hollywood’s it girl Marilyn Monroe (Michelle Williams). Clark details his time working as 3rd assistant director to Olivier. His job consisted of doing whatever anyone told him to do. Somehow he ended up becoming a confidant of the notoriously problematic and troubled Monroe, and My Week with Marilyn covers the week Clark spent in fantasy land with his favorite blonde bombshell. 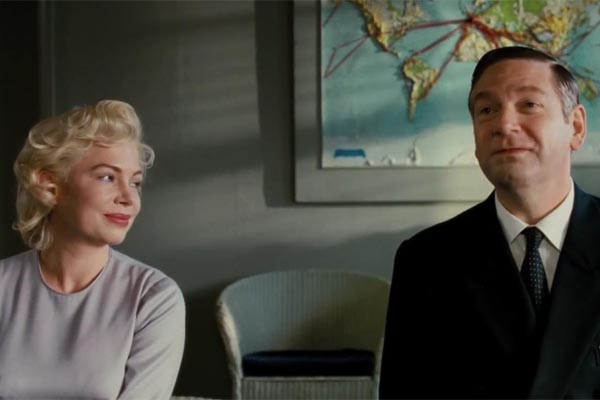 Colin Clark had a knack for words and his books make for fun, light reads. This is the sort of reading one might do at the beach, or, in my case, by the pool at my old apartment in southern CA. I quite enjoyed the little insights he gave into the world of my favorite celebrity couple. To be honest, I’ve never cared much for Marilyn Monroe. I recognize her overwhelming star quality, but she’s never moved me as an actress, and the fact that she dominates the pop culture market from beyond the grave (rather like James Dean and Elvis) is off-putting. Therefore, whether Clark’s claims of love on a sunny afternoon near Windsor are true or not is of little interest to me. What his books aren’t are very serious or in-depth. Consequently, the film isn’t very serious either and what we are treated to is a bunch of over the top caricatures of larger-than-life celebrities.

Michelle Williams gives the best turn of the entire film. She doesn’t have the charisma or the curves that the real Marilyn possessed, but she gives an honest attempt at projecting the troubled vulnerability beneath the sex symbol exterior. As the film seems to be a showcase for a possible Oscar nomination, it would make sense that she was allowed to give a deeper exploration of her character. There are times when I did feel sorry for “Marilyn” but everyone around her was so over the top and silly that it was hard to take anyone seriously. Judi Dench phoned in as Sybil Thondike and will probably get an Oscar for her 3 minutes of screen time. Emma Watson is a pointless space-filler as Lucy the wardrobe girl in her first post-Harry Potter role. Dougray Scott was a guy with a cliche and silly New Yorker accent – oh, I’m sorry he was supposed to be Arthur Miller (anyone remember him from Ever After with Drew Barrymore?). Julia Ormond is a lady named Vivien Leigh who thinks she’s no longer loved because she’s 42. 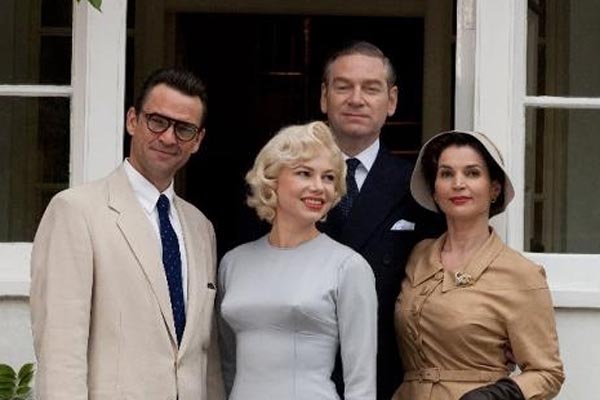 The worst performance was given by Kenneth Branagh. Let me rephrase that, my least favorite performance was given by Kenneth Branagh. All the critics seem to be wetting themselves, saying how he’s a shoe-in for an Oscar and how brilliant he is at capturing the hammy essence of Sir Laurence Olivier. Hammy is right. One could glaze him up and set him on the table for Christmas dinner. I’m sure he’s been waiting to play Olivier on screen his entire life, so now that he’s finally gotten his chance, he went all out with it. In constructing the character, Branagh took some cues from Olivier himself, using facial prosthetics such as a fake chin to give him the famous Olivier cleft (not to mention enough make-up to make him look like a drag queen in training), although he only really looks like Larry in some instances; he simply doesn’t have the fantastic bone structure. He also tries on various voices and dramatic gestures as if to prove he is an actor. 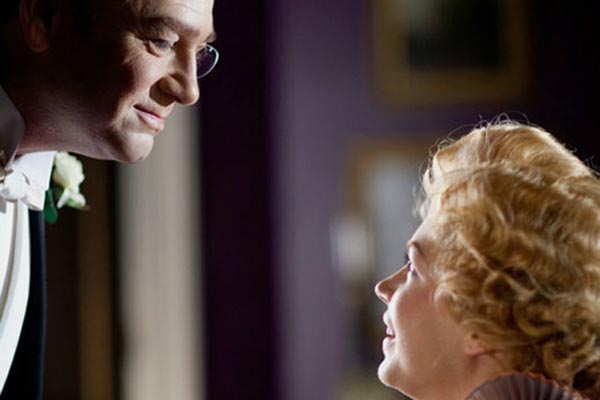 The real Laurence Olivier once said of people in his profession, “We ape, we mimic, we mock, we act.” This is exactly what Branagh does. He plays Olivier as a camp, completely over-the-top buffoon, out to steal the show by being loud and obnoxious and trying to get all the laughs. He mimics Olivier but never attempts to get beyond the surface. This is not entirely his fault. There are some instances where he might have had the opportunity to dig a little deeper, such as those involving Vivien Leigh. For example, there is one scene that takes place in a screening room at Pinewood. Larry and Vivien are watching the daily rushes from the film. Seeing the young and beautiful Marilyn flounce around on screen makes Vivien upset and she begins degrading herself (how cliche can this portrayal of Vivien Leigh get, honestly?). Larry, using the nickname he lovingly bestowed on his second wife, takes Vivien in his arms and says, “Oh, Puss, you’re ten times the actress she is.”  In a flash, her mood changes (she was crazy, don’tcha know?). “If you could see the way you look at her,” Vivien passionately emotes. “I hope she makes your life hell,” she concludes before storming out of the room. Colin, who witnesses the scene from the doorway, comes in and offers Larry a cigarette, which he takes with slightly shaking hands. In real life, Laurence Olivier’s marriage to Vivien Leigh was on the rocks at this time, and she suffered a miscarriage during the making of the film, adding an extra layer of misery to the stress of dealing with an unprofessional co-star. When he takes the cigarette offered him by Colin in the screening room, we get the tiniest glimpse of what could possibly have been the human side of Laurence Olivier, but the film cuts to the next scene before Branagh can go any deeper. It’s a pity, because in this film Larry comes off  as not only cliche but also as a complete tit. What’s so disappointing is that these really are the common perceptions of Laurence Olivier today–that he was camp, a hammy actor and a mean person–and Branagh’s performance, as well as the way this film is scripted and directed, serves only to enhance rather than dispel these views.

For the average viewer who knows nothing about the real people being depicted, My Week with Marilyn probably seems like a good film, or at least some fun, light entertainment. For fans, however – particularly those of Vivien Leigh and Laurence Olivier – it will probably be a disappointment. This film is extremely shallow. The real Monroe, Olivier and Leigh were legends in their own time and they embodied an aura of glamour and mystique that was so essential to classic Hollywood cinema. The actors playing these people completely pale in comparison. For me, My Week with Marilyn just proved that they really don’t make ’em like they used to. If you’re looking for pure, cliche entertainment, this may be the film for you. If you’re hoping for an in-depth glimpse into the secret lives of some of the most famous personalities of the 20th Century, best head elsewhere.

Film Diary Friday (on a Monday): Twin Peaks: Fire Walk with Me