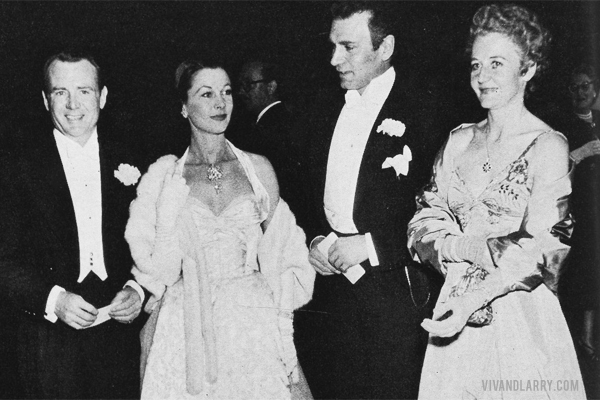 Many actors are known for advocating for various organizations and charities, whether it’s fighting for the rights of children with UNICEF, saving the environment with Greenpeace, searching for a cure for AIDS, or anything in between. Philanthropy isn’t a new phenomenon in the entertainment industry, however, and many film stars from the golden age of Hollywood–including Vivien Leigh and Laurence Olivier–also leant their voices and star power to raising awareness and money for charity.

In 1946, in conjunction with the re-start-up of The Royal Command Film Performance, Larry and Vivien became spokespersons for The Cinematograph Trade Benevolent Fund. The CTBF was funded in 1924 to provide financial assistance to anyone in need that had been working in the British film industry for at least two years (bfi.org). This was especially poignant in 1946, when many families and individuals were grappling with major life changes due to the war.

The Royal Command Performance had been around for centuries. The monarchy commanded special acting performances for their pleasure, and in the 19th Century the command performances became a charitable event. Queen Victoria and Prince Albert were great patrons of the arts, commanded several theatrical exhibitions.

The command performance started including films as early as 1896, when film was truly in its infancy. Annual Royal Command Film Performances ceased for a number of years, and started up again after the war, becoming all-star galas that were attended by film personalities from both England and the United States.

I have photos and video from three of the Film Performances attended by the Oliviers. The film shown in 1946 was A Matter of Life and Death (Michael Powell and Emeric Pressburger) starring David Niven, Roger Livesey and Kim Hunter. The Oliviers made a special appeal to the CTBF that was likely shown in theatres before a film screening. Watch newsreel footage of the Oliviers greeting the Royals at the 1946 performance, and footage from the press reception held at Claridges before the premier. Other celebrities that attended include Margaret Lockwood, Stewart Granger, John and Mary Mills, Patricia Roc, and Reginald Gardner, and Valerie Hobson, Deborah Kerr, and Joan Bennett.

In 1947, the film chosen for the gala was The Bishop’s Wife (Henry Koster), again starring David Niven, along with Loretta Young and Cary Grant. View newsreel footage from the stars’ arrival.

Scott of the Antarctic (Charles Frend), starring John Mills and Diana Churchill, was chosen for 1948. Stars in attendance included the Oliviers, Elizabeth taylor on the arm of Robert Taylor, Patricia Neal and Ronald Reagan, Diana Dors, and Myrna Loy. View the newsreel here.

There does not seem to be any footage or photos (that I’ve seen) of the Oliviers at an RCFP between 1948 and 1952, when they attended again for the premier of Because You’re Mine (Alexander Hall) starring Mario Lanza.

Today, the event is simply called the Royal Film Performance. Recent films that have been premiered at the charity event include The Chronicles of Narnia: Voyage of the Dawn Treader, The Lovely Bones and Casino Royale.