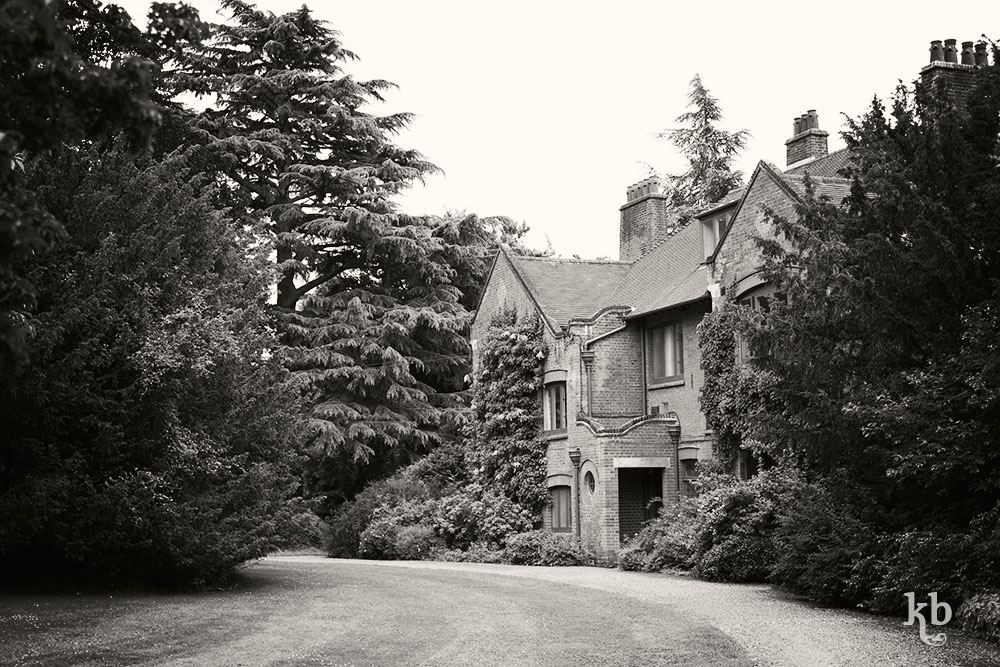 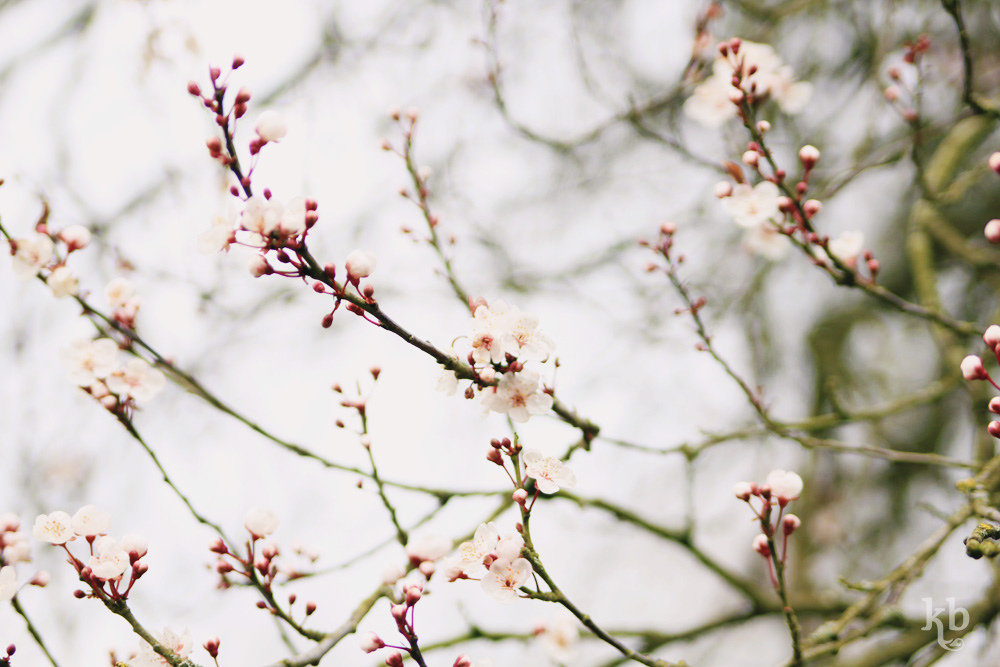 It’s officially spring, but winter still reigns in England. With freezing temperatures and even snow on occasion, it hasn’t been a very pleasant time to be outside. However, I recently treated myself to a new camera lens and was eager to try it out. As I was going to visit Robbie near Buckinghamshire anyway, I had a spur-of-the-moment idea (as usual) of going out to Notley Abbey for a photo shoot. Unfortunately, they were booked up with bridal viewings on Sunday, so I went this past Monday, instead, and was met by my friend Zara who came up from London.

I’ve been to Notley a few times now in various seasons, but am always struck by the beauty that surrounds it. Walking around the manicured grounds, it’s equally easy to imagine Vivien Leigh and Laurence Olivier in their heyday, and why they loved this place so much. I tried to capture some of the old world charm in my photographs. It really is a stunning house. 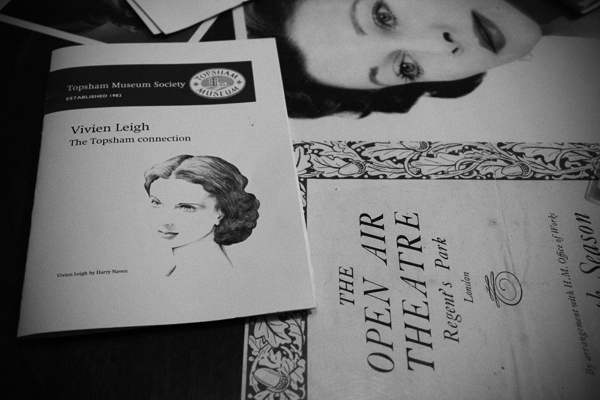 I know I said no new blog posts until I’ve handed in my dissertation. I lied. In desperate need of a break and a respite from writer’s block, my friend Sammi and I decided to hop a train to Devon to visit the fabled Topsham Museum. I say “fabled” because I’ve yet to meet any other Vivien Leigh fans who have been there. Well, it turns out we weren’t special after all because, as curator Rachel Nichols informed us, fans from all over the world visit the quaint hamlet near Exeter just to see the Vivien Leigh memorabilia on display in their museum. This includes her daughter Suzanne Farrington, who visits a few times a year. What’s the connection? Topsham is a  picturesque port village on the River Exe with roots that date back to Roman times. The Holmans, whom Vivien Leigh married in to in 1932, were thriving ship builders here in the mid-19th century. Leigh Holman’s sister Dorothy lived in a massive house at 25 The Strand, and Suzanne used to spend holidays here. There are stories of Vivien coming to visit Dorothy on occasion in the 1940s and 50s (no word whether or not Larry Olivier ever tagged along). Members of the local youth club, which Dorothy founded in 1939, remember Vivien stopping by to play table tennis and offer practical advice about acting. In the 1960s, Dorothy decided to turn her home into a museum about local culture and history. Hearing about her aunt’s plans, Suzanne donated several items of her mother’s to be put on display. Suzanne and/or Dorothy have also donated Vivien’s belongings to a few other museums in Exeter. The prized piece in the Topsham collection is the silk nightgown Vivien Leigh wore as Scarlett O’Hara in Gone with the Wind. After filming wrapped, Vivien was allowed to keep two costumes from the wardrobe department. This was one of the pieces she chose. Rachel told us that she discovered the nightgown in the bottom of a chest at the back of the museum and that it still held traces of Vivien’s perfume. This dress is switched out for a replica every few months, which is the version we saw on our visit. Other items in the exhibit include the gown Vivien wore to the London premier of Richard III in 1955 (this was my personal favorite, it’s so beautiful), a chair from the St. James Theatre, a tan day-suit, Letters from Vivien to Dorothy, including an invitation to Suzanne’s wedding to Robin Farrington and a calling card for Lowndes Cottage, a veiled hat and fur muff, a scent bottle, a cashmere stole from India and a silk square Vivien used to cover her dirty clothes at the end of the day–a habit she picked up at the convent school in Roehampton as a child. It was a real treat to get to see these things up close and in person, and the staff at the museum could not have been more friendly. If you’re ever in the Westcountry or just feel like venturing out to see this museum, I’d definitely recommend it. The town itself is beautiful and the museum adds a nice extra touch. I’m so glad fans travel all the way there just for Vivien. It’s certainly a testament to her lasting power! Photos open in lightbox. 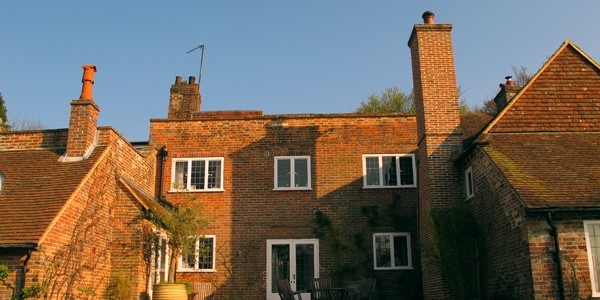 I woke up this morning with every intention of going to the library and studying. Instead, Sammi Steward and I took an impromptu trip to Sussex to snap some photos of Vivien Leigh’s final resting place. The weather was perfect: 65 degrees and sunny. What better thing to do on a sunny spring afternoon than go to the countryside?

We met up at Victoria Station and boarded the next train to Croydon where we changed (and missed the hourly train to Sussex by literally 30 seconds) and headed to Uckfield. Sussex is a beautiful area. I remembered how I’d loved it when I did a summer abroad in Brighton my junior year in college. How time flies! On the train down, Sammi and I were having a discussion about Vivien Leigh and Laurence Olivier something or another when suddenly, the man in the seat across from us said, “I take it you’re going to Tickerage Mill?” How did he know? Apparently our indoor voices aren’t that quiet. He introduced himself as Duncan, the mayor of Uckfield. He said his in-laws very nearly bought the house next door to Tickerage Mill, and was very kind in not only telling us the easiest way to get out there, but arranged a little meeting between us and his friend who runs the Picture House cinema in town–apparently it’s one of the oldest indie theatres in England. Duncan also told us a lovely story about his friend’s claim to fame: Said friend had been up in London for work and had had a few drinks before catching the train back home. As Uckfield is the end of the line, he was roused out of his nap by a shake on the shoulder and a man saying, “I think you’re getting off at Uckfield.” The man was none other than Sir Laurence Olivier on his way to visit Vivien Leigh (conveniently, Uckfield is just between Brighton and London), and he offered Duncan’s friend a ride home in his hired car. We knew Larry went to visit Vivien on occasion!

A couple of friends and I decided to spend the weekend in Paris. It was my first time in France, and I went with only three things in mind: visiting Laudree for their famous macaroons, eating lots of cheese, bread and drinking wine, and seeing Oscar Wilde’s grave. Luckily I was travelling with someone who spoke the language because my French vocabulary consists of about three words, merci! My impressions of Paris have been formed by the movies. The quaint streets of Montmartre seen through yellow and green filters in Amelie, mimes roaming the streets in black and white striped shirts with red berets in Paris Je T’Aime, etc.

It had all of these things (except I didn’t see any mimes, unfortunately) and more. The food was tres magnifique (The cheese! The baguettes! The pastries!), I was mistaken for a French girl a couple of times, I saw Oscar Wilde’s resting place and the Eiffel Tower from one of the most beautiful views in the city, saw the (outside of the) Louvre and more. It’s a beautiful city that prides itself on its history and culture. Larry and Vivien frequented Paris, performing, going to night clubs, enjoying the local cuisine. France was one of their favorite vacation spots and it’s easy to see why.

This is a bit of Paris through the eye of my camera(s). Enjoy!